LONDON (REUTERS) - Though he says he feels no pressure from above, Antonio Conte looked a relieved man and said he was lucky after his Chelsea side came from behind to beat Watford 4-2 on Saturday (Oct 21), halting October's winless run.

But he acknowledged the defensive frailty that has resulted in the Premier League champions shipping seven goals in their last three matches and repeated his mantra that only through hard work could the side improve.

"I feel a lot of pressure but never the pressure that the club might sack me," said Conte, whose tenure at Chelsea has been the subject of speculation, given the club's history of dispensing quickly with coaches when results start to falter. 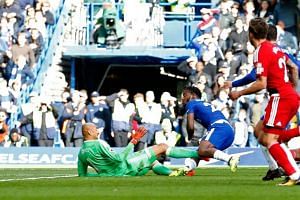 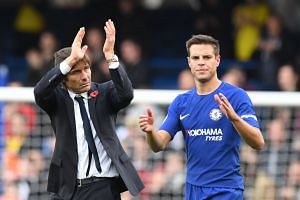 "When I go home, I'm happy because I know I'm putting in 150 per cent for my club and my players."

"When you concede seven goals in the last three games you have to try to understand and to try to improve. You have to continue to work," he said.

"But when you play every three days it's very difficult to work on tactical aspects…sometimes you have to play a game without training."

He said the team, who have lost several key players including influential defensive midfield N'Golo Kante to injury, were training 70 per cent less than last season when they were not playing in Europe and had a week between matches.

Chelsea have also scored eight goals in the last three games, however.

"It depends if I want to see the positive aspect or the negative aspect," Conte said, smiling. "I think I prefer to stay halfway and look at both aspects.

Watford pushed Chelsea hard and squandered several good chances but Conte praised his players' heart in coming from 2-1 down and said he had been a bit lucky with his substitutions.

"Substitutions sometimes work and sometimes don't. It's important for a coach to decide the right moment if there's a situation to improve... I was pleased for Michy," Conte said.

"I think today I was lucky."