MANCHESTER, England (REUTERS) - Liverpool's defending, not their failure to create clear-cut chances, was behind their 2-1 loss to Manchester United on Saturday (March 10), manager Juergen Klopp said.

Two goals from Marcus Rashford in the opening 24 minutes put United in charge of the game and Klopp felt his back-line was not aware enough.

"Long balls to Romelu Lukaku and second situations. Lukaku is one of the best strikers in the world, we needed to be around to pick up the ball, we were not and Rashford could use the situation twice," he said.

"We have to defend these situations better. You can always lose a header or a challenge with Lukaku of course but there is a gap in behind and we need to close that," said the German.

But Klopp defended right-back Trent Alexander Arnold from criticism over the first goal where he was beaten by Rashford.

"Rashford is coming with 100 miles an hour. Trent makes this move and then he cuts back and then there needs to be another player. Could he have done better? Probably. You don't get a second chance a lot. It was brilliant from Rashford," he said.

While Liverpool hardly tested United keeper David De Gea, Klopp rejected the notion that he was frustrated by his team's lack of chances. 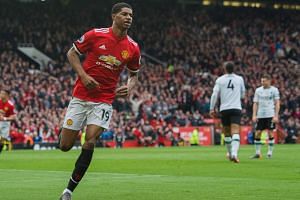 "How can I be frustrated when I play against a world class team like Manchester United and we don't create a lot of chances? It is possible to win here 1-0 or 2-0. The third or fourth opportunities will not come.

"We had enough chances to win but it is not enough when you concede. We have to defend these two situations better and we have to be clinical," he said.

"The problem is we concede these kinds of goals. We have to continue working and turn fortune a little bit more on our side in these decisive moments."

The former Borussia Dortmund manager said he felt Liverpool should have had a penalty when Sadio Mane went down under challenge from Marouane Fellaini.

"It was a clear penalty with Fellaini on Mane, in situations like this you need the right decision," he said.

Third-placed Liverpool now trail United, a place above them, by five points.

"It is all about the result and we lost. It is very important (we bounce back), we have no time to waste," he said.