LONDON (REUTERS) - Liverpool maintained their finest start to any season, earning a sixth straight Premier League win 3-0 over Southampton as Manchester City returned to form with a dazzling 5-0 win at Cardiff City on Saturday (Sept 22).

On an afternoon when Manchester United welcomed former manager Alex Ferguson back to Old Trafford only for Wolverhampton Wanderers to spoil the party with a 1-1 draw, United's deadliest rivals continued to set a burning pace.

Liverpool had never before won their first seven games in all competitions in any season but they marked Juergen Klopp's 600th match as a manager by surpassing their 1961-62 season record when they won their first six.

It left Klopp smiling on his landmark day.

"Winning seven in a row is cool but challenges will get tougher and tougher," he said. 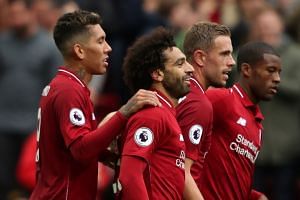 Football: Aguero scores in 300th game as City roar back to form

Champions Man City put their shock home Champions League defeat by Olympique Lyonnais behind them, rebounding with a crushing win at Cardiff kicked off by Sergio Aguero's opener on his 300th appearance for the club.

The Argentine celebrated his signing of a one-year contract extension with his 205th City goal just after the half-hour, opening the floodgates for further strikes before the break from Bernardo Silva and Ilkay Gundogan.

Record signing Riyad Mahrez added his first two for City after the break.

Chelsea, third on 15, have the chance on Sunday to join Liverpool with a perfect start to the campaign on 18 points if they win at West Ham United while Watford's 1-1 draw at Fulham in the early game kept them fourth on 13.

TRYING WEEK In the day's late game, goals from Harry Kane, from the penalty spot, and substitute Erik Lamela earned Tottenham Hotspur a nervy 2-1 win at Brighton & Hove Albion, pushing Spurs into fifth on 12 points at the end of a trying week.

Ferguson, the patriarch of Old Trafford, received a standing ovation as he took his seat in the stands for the first time since he underwent emergency surgery after a brain haemorrhage in May.

United looked poised to welcome him back with a win as Brazilian Fred scored his first goal for the club since his move from Shakhtar Donetsk but Jose Mourinho was left frustrated again after a recent resurgence with Joao Moutinho deservedly equalising soon after halftime.

United are losing touch with the leaders, now eight points behind Liverpool in sixth place, with midfielder Marouane Fellaini conceding: "Everyone is disappointed...After that it will be difficult to close the gap." Mourinho gave a withering verdict on United's approach.

"That is the attitude I like my teams to have in every match. We didn't have that. They did. That attitude made a difference." Aleksandar Mitrovic joined Eden Hazard on five goals as the Premier League's top scorer when the Serb's second-half equaliser for Fulham checked Watford's best start to a top-flight campaign after Andre Gray's 90-second opener.

At the other end of the table, Burnley hauled themselves off the bottom with their first win of the season, 4-0 over Bournemouth to interrupt the Cherries' fine campaign, with goals from Matej Vydra, Aaron Lennon and a double from Ashley Barnes.

Cardiff, Huddersfield Town, beaten 3-1 at Leicester City after taking an early lead, and Newcastle United, who drew 0-0 at Crystal Palace, prop up the league on two points.