LIVERPOOL, England (AFP) – Jurgen Klopp’s frustrating start to the season continued as Liverpool were held to a 1-1 draw by Burnley at Anfield on Saturday (Sept 16), despite Mohamed Salah’s fifth goal of the season.

The German made seven changes, including a first start of the campaign for Philippe Coutinho, to the side that was held at home 2-2 by Sevilla in the Champions League in midweek, but yet another defensive error cost Liverpool dearly against a Burnley team that has not won at Anfield in 43 years.

Two goals in three minutes were the highlight of a first half in which Liverpool dominated possession, yet were required to come back from a goal down after Scott Arfield opened the scoring on 26 minutes.

It again highlighted the weakness of a Liverpool defence that has been under the microscope over the opening weeks of the season and Klopp’s furious response on the touchline spoke volumes about his own view of proceedings.

Robbie Brady won an aerial challenge with Trent Alexander-Arnold, heading into the area where centre-halves Ragnar Klavan and Joel Matip were drawn into a challenge on Chris Wood.

A faint touch off Klavan moved the ball on and the unmarked Arfield drove the ball home from 12 yards for his first goal since last October.

That strike stunned the home crowd into silence as Burnley threatened to spoil Liverpool’s celebrations on the 125th anniversary of their first-ever match.

Fortunately for the home supporters, they only had to wait three minutes to draw level with the most simple of goals as an Emre Can pass, from well inside his own half, dropped invitingly for Salah. 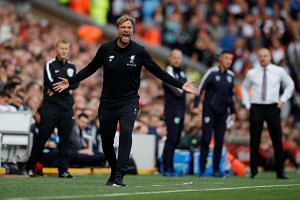 The Egyptian showed neat control and a touch to take his marker Stephen Ward out of the game before driving an unstoppable finish past Nick Pope, the goalkeeper making his first Premier League start in the absence of injured England international Tom Heaton.

The goals opened up what had been a tight affair with Salah, twice, and Sturridge testing Pope with low shots that were comfortably dealt with.

Pope, relatively comfortable in the first half, looked less so in spilling Can’s shot from the edge of area and the goalkeeper, jeered throughout the first half by Liverpool supporters for time wasting, was finally booked for the offence on 54 minutes.

Liverpool pressed ever closer, with yet another Coutinho shot deflected behind and Sturridge’s committed run across the edge of the penalty box ending with a shot which Pope pushed to safety.

Burnley sounded a note of caution on a rare counter-attack when Jack Cork’s superb challenge set up Brady for a shot which Simon Mignolet needed two attempts to catch.

Can then needlessly gave away a corner from which Brady picked out Ben Mee, whose goalbound header was cleared off the line by Matip.

And from the following corner, the same combination – Brady to Mee – saw the Burnley defender again denied, this time by Mignolet’s reflex block.

In a strong response to that scare, Alexander-Arnold’s first-time shot was well held by Pope, with the replacement keeper later doing even better to tip a close-range shot from substitute Dominic Solanke onto his bar.