Jurgen Klopp's Liverpool side will host Pep Guardiola's City at Anfield for the first leg, either on April 3 or April 4.

It will also be the first meeting of two English sides in the last eight of the Champions League since Chelsea played Manchester United in the 2010-2011 season.

City's director of football Txiki Begiristain said: "We know each other very well, they are a very offensive team, the truth is it is going to be a great couple of games and we are going to see good football." 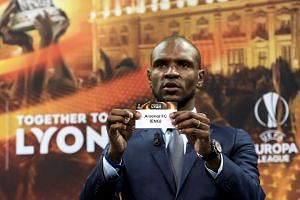 Cristiano Ronaldo and his Real team-mates will be happy to be playing the second leg of their tie at their Santiago Bernabeu stadium against Juventus, whose experience proved lethal to English club Tottenham in the last 16.

The Italian Serie A side, beaten 4-1 by Real in Cardiff last season, will host the first leg in Turin following the draw on Friday (March 16) at Uefa headquarters.

In the other ties, surprise qualifiers Sevilla take on Bayern Munich and Barcelona were paired with Roma. Roma will have unhappy memories after losing 1-6 on their last visit to the Nou Camp.