SINGAPORE - The Football Association of Singapore (FAS) has assured the LionsXII that each player will have a playing contract at the same salary for the 2016 season.

It revealed the development following a meeting between the players and FAS president Zainudin Nordin and general secretary Winston Lee on Thursday evening.

The LionsXII had been booted out of Malaysian football on Tuesday, following the Football Association of Malaysia's decision not to extend the agreement which allowed the Singapore outfit to play across the Causeway and the Harimau Muda to feature in the S-League.

It added that the team were informed that the FAS is consulting its key partners on the possibilities of the LionsXII players featuring in the S-League next season. 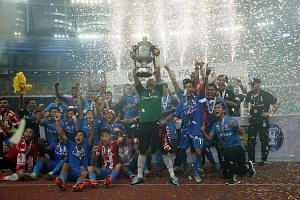 Singapore out of Malaysian league, leaving LionsXII in limbo 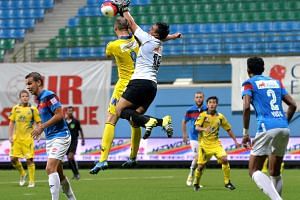 Singapore out of Malaysian league: S-League clubs may get a booster shot 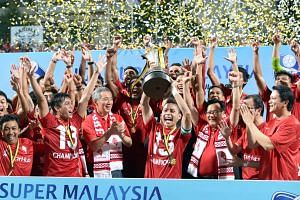 Football: Kicking LionsXII out of Malaysian league helps no one

"We are thankful to the FAS management for their concern and in taking swift action to support us. The certainty that every player in LionsXII is assured of a playing contract for next year means a lot to us, and the guarantee that we will receive the same salary is definitely a big bonus," said Zulfahmi Arifin.

"FAS responded quickly to assure us of our future, and we are very grateful for this gesture. We appreciate the guarantee of contracts for 2016. It was a different experience for us to play in a foreign league for the past four years but we will now look ahead to next season in returning to a very competitive S-League with this assurance given to us by FAS," asserted Gabriel Quak.

"Their (FAS management) prompt action in assuring us all have given us full confidence to do well on Saturday," revealed head coach Fandi Ahmad, with a nod to Saturday's second leg of their Malaysia Cup quarter-final against defending champions Pahang. The LionsXII trail 1-4.