MANILA - Lions coach V. Sundramoorthy has insisted that his team are concentrating on reaching the Asean Football Federation (AFF) Suzuki Cup semi-finals instead of being distracted by Baihakki Khaizan's Facebook outburst.

In the pre-match press conference on Thursday (Nov 24), the Singapore caretaker coach was asked about the social media storm and he replied simply: "We are just focusing on the game."

"I am analysing Indonesia and looking into their weaknesses. We will try to exploit that and close down their strengths." 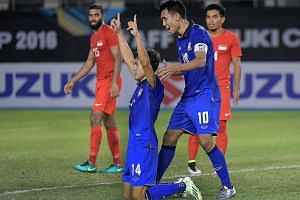 But Riedl, an Austrian, wants to remain cavalier and go down with all guns firing if need be even as Indonesia remain bottom of Group A on goal difference.

He said: "This might be the last press conference from me but I am not worried. We will not play for a draw.

"We are expecting them (Singapore) to be similar (to play defensive football), we are prepared for that. We have to win, they have to win. It might be an open game."

In his initial Facebook post, which was written in Malay and taken down hours after it went up, Baihakki had claimed that the actions of an assistant coach in the team had caused him to lose his place in the first XI.

The 32-year-old added that the assistant coach and Sundram had been giving him the silent treatment.

The Straits Times understands that the post was directed at Sundram's assistant in this AFF Cup, Firdaus Kassim, 29, who was appointed last month.

Baihakki also said that he was axed because of the assistant coach's analysis of his match statistics.