LONDON (AFP) - Leicester City manager Claudio Ranieri called his Chelsea counterpart Guus Hiddink on Monday to thank him for the draw with Tottenham Hotspur that gave his team the Premier League title.

Spurs' 2-2 draw at Stamford Bridge brought Leicester the first top-flight title in their 132-year history and Ranieri, who was sacked by Chelsea in 2004, was quickly on the phone to express his gratitude.

"Just after the final whistle, I got a call from Ranieri," Hiddink, Chelsea's interim manager, told his post-match press conference.

"He called us and thanked us for what we did, especially in the second half. I congratulated him for being champion.

"I think they deserve it. It might be not a surprise anymore, but maybe a shock for the established clubs that they did so well. 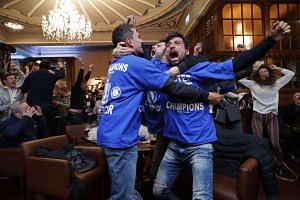 Football: Euphoria in streets of Leicester as outsiders take title

Football: Reactions from around the world after Leicester's Premier League triumph

"They didn't implode. There was no tension when they started smelling the title. That's why I think they deserve the title." Asked if Ranieri, who cried on the pitch following Leicester's recent 2-0 win at Sunderland, had sounded emotional, Hiddink replied: "Yeah. I didn't see any tears because it was not a Facetime conversation.

"But his voice was trembling a bit. Five times, (he said) thanks. Because the emotion is going up." Ranieri, 64, was reported to have returned to England earlier on Monday after making a quick trip to Italy in order to have lunch with his 96-year-old mother, Renata.

The genial Italian will get his hands on the first league title of his 30-year managerial career on Saturday after Leicester's final home game against Everton.

Spurs looked to have done enough to keep the title race alive after goals from Harry Kane - his 25th of the campaign - and Son Heung-Min put them 2-0 up, but Gary Cahill reduced the arrears before substitute Eden Hazard curled in a stunning and decisive 83rd-minute equaliser.

Spurs head coach Mauricio Pochettino backed his players to bounce back from the disappointment of missing out on the title.

"I want to congratulate Leicester and Claudio Ranieri and all the players," the Argentine said.

"It's a fantastic season for them. But we feel very disappointed because were were 2-0 up and in the second half had opportunities to score.

"But it's not a moment to analyse the game. The players are very disappointed and sad, but this is a good feeling.

"For the future, we are the youngest squad of the Premier League and I think we're in a fantastic position.

"We're disappointed for the title, but now we need to refocus and try to keep our place. Our objective is to finish second." Spurs midfielder Mousa Dembele is likely to face retrospective disciplinary action after appearing to gouge Diego Costa's eye, while there were mass touchline melees shortly before half-time and after the final whistle.

But Pochettino, who said he "didn't see" the Dembele incident, claimed his side's feistiness was purely a sign of their desire to win.

"In football this sometimes happens, with the emotion," he said.

"We need to learn, but I can say I feel very proud of our players and our supporters and the future will be brilliant."