LONDON (THE GUARDIAN) - Serie A stopped for Davide Astori on Sunday (March 4). This was supposed to be the biggest weekend of the season, the biggest for many seasons, perhaps, all of the top eight sides pairing off against one another with everything from the Scudetto to Champions League places and Milan derby bragging rights up for grabs. Then a young man died, and none of it really seemed to matter.

Astori was not a household name outside of Italy. He played most of his career away from the very biggest clubs. Although he graduated from the Milan academy, the first six of his 10 seasons in Serie A were spent with Cagliari. The last three were with Fiorentina. He had just one season of Champions League football, at Roma, in 2014-15, and only played in two games.

For a sense of his impact on people within the sport, though, you need only have listened to a sampling of the tributes that came flooding in on Sunday from figures as diverse as Antonio Conte, Sergio Ramos and David Beckham. Gigi Buffon called Astori "the greatest expression of an old world, one in which masters were made of values like altruism, elegance, education and respect".

Others remembered him for his optimism - that wide grin as fixed on his face as the bushy moustache right above it.

"How many times did we laugh together," wrote Leonardo Bonucci. "How many conversations did we have sat beside one another at (the Italian national team's training base in) Coverciano, or out on the pitch… You with that smile that never ended and which let us know how much good you had inside you."

Former colleagues spoke of his leadership, and his willingness to give up his time to help others. Astori had been named as Fiorentina captain at the start of this year, and in perhaps his last major interview - published by Gazzetta dello Sport last month - he had scolded journalists for putting too much pressure on a young talent like Federico Chiesa.

His own footballing qualities deserve to be recognised. Things might not have worked out for him at Roma - where injuries played a part - yet this is someone who played 14 times for Italy, despite reaching his peak in an era when the BBC of Bonucci, Andrea Barzagli and Giorgio Chiellini held a near monopoly on the starting roles. 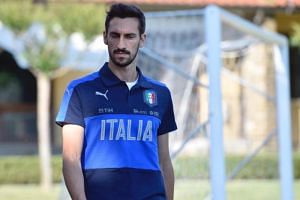 Football: Fiorentina skipper and Italy international Davide Astori dies at 31, Serie A in mourning with all games cancelled

It is worth noting, furthermore, that his international caps were spread across seven years and three managers. From Cesare Prandelli through Conte and Giampiero Ventura, Italy's managers invariably wanted him present in their squads even when there was no room in the starting XI. Few doubted that he would have earned more under the next boss, whoever that might be.

Besides, not every player gets to start 289 Serie A games. And you'd better believe Astori, who is survived by his partner, Francesca Fioretti, and a two-year-old daughter, was counting.

He was a man with a head for numbers. If you asked him about a given season in his career, the chances were that he would be able to tell you not only how many games he had played but precisely how they were divided across different competitions.

"Statistics are my passion," he told an interviewer from the newspaper La Nazione last year. "I'm a conservative sort."

Italian football can be a conservative culture, at times, one where big decisions often get bogged down in debate and polemic dispute. No voices were raised in protest when the decision was made to cancel every Serie A game on Sunday. But plenty of tears were shed.