A representative of the company handed his widow Azean Aziz a cheque at her Senja Road flat.

Komoco's donation is meant to help the family with its expenses, including the education of Azean's three children, and will be administered by Yayasan Mendaki, a self-help group for the Malay/Muslim community here.

Said Komoco's finance director Philip Beng: "We all read about Nur Alam Shah's passing in the newspapers and that he left behind his wife and three children.

"We were concerned about the children's needs... and felt that it was our social responsibility to help them in their hour of need."

Nur Alam Shah, 38, died of a heart attack in his sleep on May 18, and was the sole breadwinner for his family of five.

Before he died, he was trying to raise $120,000 through the Give.Asia online platform to cover the medical expenses of his son Muhammad Royyan, who turns five this year. 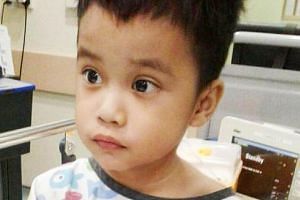 Royyan was born with Hypoplastic Left Heart Syndrome, a rare heart defect that affects normal blood flow through the heart.

The family eventually raised almost $190,000, which would cover Royyan's surgery and post-surgery medical needs for three years, and some of the family's daily expenses, according to Azean on the Give.Asia page.

Azean, a 38-year-old housewife, added that people have also donated to her family in the last few months since her husband's passing.

She told the media on Wednesday said that she was "grateful" for Komoco's donation.

She said: "I am not able to work due to Royyan's condition, so Komoco's donation will tide us over in terms of our expenses, such as household bills, transport and food."