LONDON (AFP) - Jurgen Klopp admitted he is getting sick of Liverpool's defensive miscues after they slumped to a 2-0 defeat at Leicester in the League Cup third round.

Klopp's side crashed out as careless play allowed Shinji Okazaki and Islam Slimani to score for Leicester in the second half at the King Power Stadium on Tuesday (Sept 19).

Liverpool have kept just two clean sheets this season and have been criticised for letting teams off the hook.

Reds boss Klopp admitted he is now becoming fed up of the sloppy performances which have left his side without a win in four matches.

"After the first goal you saw the heads from Leicester went up, that was a bigger difference," Klopp said.

"The game changes in moments like this, you have the chance to do it by yourself or sometimes you are on the wrong side and that's how it is. 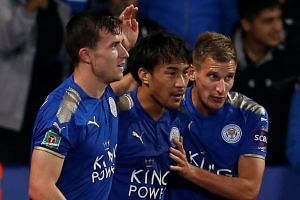 Football: Liverpool knocked out of League Cup by Leicester

"But that we concede like this, that makes me really, really sick.

"We are still a good football team, I see it, but unfortunately it doesn't feel (like that) at the moment because it's a cup competition.

"We wanted to go into the next round and nobody is interested who plays the better in the first half.

"The story of this game is really easy to tell, we were the much better team in the first half, we played good football, we didn't score, that's sometimes part of football.

"But as long as we concede goals like we conceded today, then it is quite difficult."