MILAN (AFP) - Juventus president Andrea Agnelli has been banned for a year for his role in the sale of tickets to fan groups, the Italian Football Federation said Monday (Sept 25).

Agnelli was accused of helping sell tickets to ultras fans, several of whom have links with organised crime. The tickets were then resold for a huge profit.

Three other club officials were also banned for a year and fined 20,000 euros by the FIGC who "partially accepted" the demands of prosecutor Giuseppe Pecoraro.

Juventus said it would appeal "in the firm belief that the club is in the right", adding it was satisfied that the ruling "completely rules out all possible links with organised crime".

Pecoraro had requested a 30-month suspension and 50,000 euro fine against Agnelli. He had also demanded two Juventus matches be played behind closed doors and a European extension of the ban. 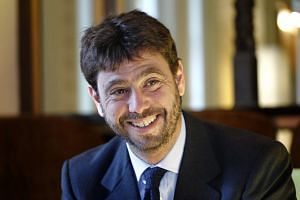 "I'm partly satisfied because we've been able to prove the guilt of everyone involved, but the findings were serious that, in my opinion, they should have been punished more, so we'll appeal," said Pecoraro.

"I think going to another court will be useful, bearing in mind they went to organised crime, and that is very serious." Agnelli - who was recently appointed president of the European Club Association (ECA) - has denied dealing with Rocco Dominello, a supporter very close to the Calabria-based N'drangheta mafia who was sentenced to more than seven years in prison in this case, but had recalled meeting him.

"Obviously the sentence disappoints us, even though the charges were revised," said Agnelli's lawyer Franco Coppi, adding that they would now consider an appeal.

Juventus is accused of having ceded blocks of tickets to ultras group when it is not allowed to sell more than four at a time.

The six-time defending Serie A champions had said that they would not request Agnelli to step down if he were found guilty.