LONDON (THE GUARDIAN) - Jurgen Klopp has vowed Liverpool's injury-hit squad will fight to the last to land the club's first English Premier League title in 29 years on Sunday (May 12) and will go to Wolves with the motto that defines their season: "It's only pain."

The Reds picked up several problems in securing a remarkable second successive Champions League final on Tuesday, with Andy Robertson and Jordan Henderson hurt in the 4-0 win against Barcelona.

But, with the EPL title at stake - they need to beat Wolves at home to capitalise on any slip by Manchester City at Brighton - Klopp revealed his walking wounded were determined to play on.

Only Roberto Firmino and Naby Keita are confirmed absentees, while Mohamed Salah, the league's top scorer on 22 goals, should be available after missing their Champions League semi-final triumph through concussion.

At his pre-match press conference on Friday, Klopp said: "The famous three words of this week in the dressing room. Very important for all the young lads to learn.

The German also felt such defiance had characterised their entire campaign and that his bond with the club's fans, one that underpinned incredible victory over the Spanish champions, would be non-existent without it. 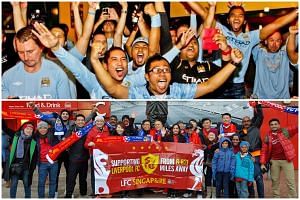 He explained: "In Liverpool, it's mainly about the supporters and not me. If I want to love Liverpool fans, I have a bigger choice because there are so many. They have to deal with me and my character.

"It's a proper fit, but it's about the performance. I could be the most funny guy in the world but, if the boys would not play good football, nobody would laugh at my jokes.

"It's all about the boys, always. They have to deliver. If they don't, no chance. The group of players we have here is so special. Since Tuesday, if I had to find a very short description for the group, I would say, 'It's only pain'. That's how they went through the season. It was always hard, always difficult, but it was only pain. So let's carry on."

Klopp also touched on the June 1 Champions League final with Tottenham as a meeting of the "two teams who showed the biggest heart in the whole competition", but was critical of the exorbitant prices fans were being charged and of Uefa's "irresponsible" choice of venues for the two European finals.

He added: "With Madrid, it's unbelievably expensive, but it's not another part of the world at least. Going to Baku (in Azerbaijan) for a Europa League final is really funny.

"The guys who make the decisions, I don't know what they have for breakfast.

"Baku, I don't even know how to go there or if there is any regular flight (from England). These decisions, they must be more sensible and reasonable."

However, destiny remains in the hands of Pep Guardiola's team, who will be the first to retain the title since Manchester United in 2009 with a win over Brighton.

While he admitted there were so many variables that could cause the title to swing towards the Reds, including "one mistake of our side, one incredible performance from the opponent, or one mistake from the referee", the Spaniard urged his team to "be more precise in all the aspects and try to win the game".

Guardiola said at his pre-match press conference on Friday: "It's a privilege. We are in this position because we won a lot of games, 13 in a row, we have to win one more and that is what we have to do."