LONDON (AFP) - Jose Mourinho once again stole the show from his players, smashing drinks crates to the ground after Marouane Fellaini's late winner took Manchester United into the Champions League knockout stages and eliciting headlines on Wednesday (Nov 28) such as "Bottle of Red".

The volatile 55-year-old Portuguese - whose mood swings and barbed remarks about virtually all his players and the transfer policy of the board have cast a pall over the club this season - said the violence of his reaction was the product of several factors.

Fellaini's winner against Young Boys and Valencia's defeat by Juventus ensured the 'Red Devils' progress, though it is likely as runners-up which will pit them against a group winner in the last 16.

"Relief," Mourinho said of his celebrations. "Frustration before that and relief with the goal. We didn't play to be in trouble until the last minute, so frustration."

Along with his team, Mourinho has been consistently criticised this season, largely for United's turgid style of play. The late victory might have toned down the headlines on the British sports pages on Wednesday, but they were still far from positive.

'Water Boy', 'Smash & Grab' and the Sun's typically humorous play on words 'Water Load of Rubbish' would have greeted Mourinho this morning if he had cared to read the papers at his breakfast table in his hotel suite in Manchester which has been his home - largely spent alone as his family have not moved from London - since he took over in 2016.

The Daily Mail said "Jose Mourinho reacted in crazy fashion", and The Sun wrote that "Manchester United's boss blew his top again....Mourinho stunned Old Trafford and pundits with his reaction." The Daily Mirror was kinder under the headline 'Bottle of red,' it said "Marouane Fellaini proved Manchester United have bottle... manager Jose Mourinho proved he has strength AND bottle..." 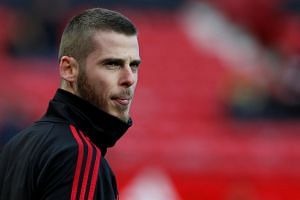 Football: Jose Mourinho on a mission to get to the bottom of misfiring Lukaku's form

Mourinho can barely twitch an eyelid these days without being criticised by former United players or pundits.

"If I saw my manager react like that, I would be absolutely livid!" opined Lineker.

However, Mourinho hit back in typically feisty fashion.

"Can myself, or another manager, have a reaction of frustration? I would invite that people to sit on the bench as managers. But I think maybe it's better to have lots of holidays in Barbados and go to the television screen and touch the electronic dummies.

"I think it's much, much, much more comfortable than being on the touchline like we managers we are.

"I am pretty sure that a proper football manager would never criticise another one for emotional reactions on the touchline because it's deja vu for them. For the ones that have a nice life, it's different."