ABU DHABI (REUTERS) - Japan coach Hajime Moriyasu was naturally disappointed that his side missed out on a winning a fifth Asian Cup title on Friday (Feb 1) but believes the improvement of the squad augurs well for the future.

The Samurai Blue went into the final as warm favourites to clinch the continental crown but went two goals down in the first half an hour before running out 3-1 losers to 2022 World Cup hosts Qatar.

Moriyasu, who took over after last year's run to the round of 16 at the World Cup, had made it clear throughout their time in the United Arab Emirates that his squad was a work in progress.

"The goal was to be champions so I'm disappointed," he said. "But I feel proud at how we developed under pressure. We had a mix of youth and experience and our seven matches we showed development against teams playing different styles.

"I wasn't to thank my experienced players and I hope that today's result makes the younger players hungry for success.

"I think this tournament will be a base to rebuild the Japan team. It's my job to oversee the process but I want the players to be proud of what we have done in this tournament."

Moriyasu blamed himself for Qatar's first goal and said once Japan conceded the second, it was always going to be tough to get back into the match. 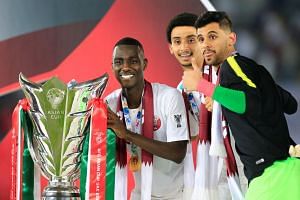 "We made a poor start. We couldn't get into our rhythm. We conceded the first goal because there was a mis-match between the Japan and Qatar systems," he said.

"We expected Qatar to play three (central defenders) and I think it's my fault that the players weren't able to express themselves.

"We were better in attack in the second half and we had the chances to tie the game but the Qatar defence was very tight."

Moriyasu said the players had arrived with different levels of fitness from various leagues around the world and he had been impressed by how the squad had progressed throughout the tournament.

"One of our goals was to improve with each match," he said.

"I think in those terms, the players really tried expressed our plan on the pitch."