STOKE-ON-TRENT, United Kingdom (AFP) - Wayne Rooney became Manchester United's record scorer when he netted his 250th goal for the English giants in a 1-1 draw at Stoke on Saturday (Jan 21), saying the landmark meant "a hell of a lot."

The 31-year-old forward, making his 546th United appearance, surpassed 1966 World Cup-winner Charlton's record in style when he bent a free-kick past Stoke goalkeeper Lee Grant into the top corner of the net at the Britannia Stadium. 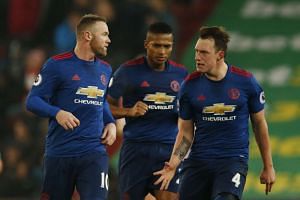 His latest United goal came a fortnight after Rooney, who succeeded Charlton as England's record goal-scorer in 2015, equalled the former attacking-midfielder's United mark during an FA Cup tie against second-tier Reading.

"It means a hell of a lot," Rooney, who joined United from Everton in 2004, said afterwards.

"It is a great honour and I am very proud," added the Liverpool-born Rooney, who made his name as an out-and-out striker but has been deployed lately as an attacking midfielder.

"The players who have played for this club have been world class. I am proud to play for this club. To be all-time goalscorer is a huge honour."

Rooney said he was delighted Charlton was present to congratulate him personally.

"When you sign for the club, you realise how important he (Charlton) is," Rooney explained.

"To surpass him in goals is something I never thought I'd do. I have the utmost respect for him.

"He came and congratulated me in the dressing room so I know he's pleased in some way."

Charlton, while disappointed to lose a record that had stood for more than four decades, said he was "delighted" it was Rooney who had deprived him of the landmark.

"It's over 40 years since I scored the last of my 249 goals for Manchester United, so I must admit that I have become used to the honour of being the club's all-time top goalscorer!" Charlton told United's website.

"I would be lying to say that I'm not disappointed to have lost the record.

"However, I can honestly say that I'm delighted for Wayne. He deserves his place in the history books," added Charlton, who saw Rooney surpass him as England's record goal-scorer in 2015.

"He is a true great for club and country, and it is fitting that he is now the highest goalscorer for both United and England." United manager Jose Mourinho said: "The record is the record. It is the record of the biggest club in England and one of the biggest in the world.

"Before him the record belonged to a legend of English football. Now Wayne becomes a legend of Manchester United," the Portuguese added.

Alex Ferguson, the United manager who signed Rooney from Everton, said: "Wayne thoroughly deserves his place in the history books of this great club and I am sure that he will go on to score many more goals."

It was a view endorsed by Charlton, who said Rooney was young enough to build goal tally that would last as long as his own United record.

"I was 35 when I retired," said Charlton. "Wayne is only 31 and still going strong... Now he's the man to beat, and I can't see anybody doing that for a long, long time."

Rooney's goal could yet prove important in the context of United's season, with the Red Devils battling to bring Champions League football back to Old Trafford next season.

"It is not nice to lose and it looked like being the case," said Rooney of a draw against a Stoke side managed by former United striker Mark Hughes.

"But we got a point that could be vital." Rooney's late leveller came after United's Juan Mata turned the ball past his own 'keeper to give Stoke a 1-0 lead in the 19th minute.