MANCHESTER, ENGLAND (REUTERS) - Manchester United chief executive Ed Woodward came under fire from supporters at Wednesday's 2-0 home defeat to Burnley, with many venting frustration that he has been unable to bring in any new faces during the January transfer window.

Woodward's reputation among United fans has become such a problem, however, that he did make one signing this month - a former journalist, hired in part to improve his image.

"I want to change perception of not only (of Woodward) himself but the ownership of the club," said Neil Ashton, until recently a journalist with the tabloid Sun newspaper.

"I got to know Ed Woodward a little bit. I discovered that the portrayal of Ed Woodward is not accurate. It's a guy that absolutely loves Manchester United," he told the US-based website World Soccer Talk.

Judging by the chants that rang out from around the ground as Ole Gunnar Solskjaer's side collapsed meekly to their first home defeat to Burnley since 1962, few among the Old Trafford faithful share Ashton's assessment of Woodward.

The 48-year-old Essex-born accountant and investment banker first entered the world of football when he advised the Glazer family, the Americans who own United, on their takeover of the club in 2005.

The late Malcolm Glazer, the family patriarch who made his fortune in real estate and stocks, bought United for £790 million, after entering the sports business in 1995 with a takeover of American football team, the Tampa Bay Buccaneers.

The leveraged nature of the United deal - the club took on loans of £525 million to finance the acquisition - by a businessman and his family who were unknowns in Britain angered many United supporters.

Woodward joined the United board after the takeover and took on a major role in expanding the club's commercial horizons, striking a series of lucrative global sponsorship and partnership deals.

Yet his role changed in 2013 when, shortly after successful manager Alex Ferguson stood down having won his 13th league title with the club, chief executive David Gill also departed.

Woodward took on the CEO role and effectively became the middle man between the Florida-based Glazers and the team manager. 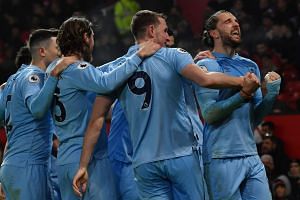 While commercial progress has continued, with United recently expanding their presence in the Chinese market , success on the field has been much harder to find.

David Moyes, Louis van Gaal and Jose Mourinho were all appointed and then dismissed as team managers before Woodward turned to former player Solskjaer.

A series of expensive player acquisitions have also failed to live up to expectations.

Website transfermarkt estimates that the club has spent around £948 million (S$1.6 billion) on players since Ferguson's departure - a period in which the club has barely even challenged for the title.

Former captain Gary Neville, now a pundit with Sky Sports, was critical of how the club was run, without mentioning Woodward by name.

"I'm struggling to understand why the ownership have persisted in trusting that management team to oversee the building of a Premier League title winning team since Sir Alex left," he said.

"If you don't lose your job for essentially overseeing that investment, that wage bill, and putting that team out on the pitch then I have to say something is really wrong. In terms of what the club needed to do for a number of years now - (it's to) put the best in class football operators into that club and they're not doing it. They're not doing it and it's a mess."

Before he was sacked in December 2018, Mourinho let it be known that his transfer targets had been vetoed by Woodward, and on Wednesday, Solskjaer said that his squad was "stretched" and said he wanted some new recruits.

In the close season, the club offloaded strikers Romelu Lukaku and Alexis Sanchez and brought in defenders Harry Maguire and Aaron Wan Bissaka, but the squad looks short on quality and is currently fifth in the league, six points behind Chelsea, who occupy the fourth Champions League qualification spot.

United point out that money has been spent on players. They maintain, however, they will not overspend and are looking for greater consistency in the quality of recruitment in order to avoid past mistakes.

The club has also made a number of backroom moves in the past year and has been investing in its analytics, scouting and data in order to improve their recruitment work.

While some pundits question whether Solskjaer is the right man to take the club forward, the chants inside Old Trafford have been supportive of the manager, while scathing of the owners and Woodward.

Another former United player, Rio Ferdinand, who was linked with a return to the club as a director of football last year, said there is a lack of clear direction.

"People at the top need to look and see this and actually make changes," he said.

"Put a plan in place that people can actually sit there and go 'Actually, I can see where we're going now'. I don't see it," he said.