SINGAPORE - Two minutes were all it took for Ikhsan Fandi to smash in his first goal for his new club Raufoss IL and help them beat Elverum Fotball 6-1 early on Saturday morning (Jan 26) at the Raufoss Storhall indoor arena.

The 19-year-old, who became the first Lion to join a European team in 30 years when he signed a two-year deal with the Norwegian second-tier side earlier this month, was brought on with fellow forward Thierry Dabove in the 59th minute of a pre-season friendly against third-tier Norwegian opponents.

The duo combined to deadly effect shortly after, when Dabove's shot was parried by former Raufoss goalkeeper Andreas Heggen, only for Ikhsan to show his predatory instincts by beating two defenders to thump the loose ball in with his right foot inside the six-yard box and make it 3-1 to Raufoss.

The new Raufoss No. 18 also displayed his willingness to run at the defence before he recorded his first assist by picking out Ryan Doghman with a through ball in the 84th minute to increase the lead to 5-1.

Ikhsan told The Straits Times: "I'm glad I got the first goal out of the way quickly but there are always things to improve on.

"The coaches were happy with my 30-minute performance. I just wanted to express myself and show the people here I can play football.

"But this is only a friendly and I still have to improve my fitness. I also want to link up play better and make more runs behind defences to create trouble for the opponents and opportunities for my team." 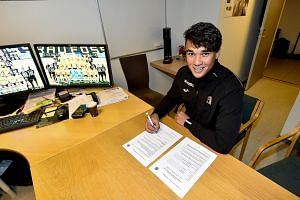 Raufoss and Ikhsan will face a sterner test when they continue their pre-season preparations with another friendly against Norwegian top-division club Odd on Thursday.

They will kick off the new season at Nest-Sotra on March 31.