ZURICH • Six months ago, Gianni Infantino was a low-profile right-hand man to European football boss Michel Platini. He was the striking, shaven-headed character who pulled balls out of pots during televised Uefa competition draws.

On Friday, Infantino was chosen as the new president of Fifa, a position which made his predecessor Sepp Blatter as instantly recognisable as some of the world's leading statesmen. It was a remarkable leap for the affable Swiss-Italian.

The polyglot lawyer, who joined Uefa in 2000 and rose to become its general secretary nine years later, only entered the Fifa race in late October, one day before the deadline. 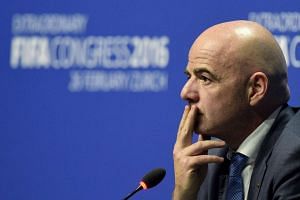 He was a stop-gap candidate after Platini had been placed under investigation for ethics violations. When Platini failed to clear his name and was banned from football for six years, the 45-year-old was left carrying the hopes of European football.

The previous time Infantino ran for elected office, it was an intense battle, a campaign decided on promises and vision. He was 18.

I told them that if I won, my mother would wash all the kits each week. And I won. So she did.

GIANNI INFANTINO, new Fifa president, recalling when he ran for president of his tiny hometown football club at just 18.

The race was for president of the tiny football club near Brig, his Swiss home town.

There were two opponents, both older men whom Infantino described as "established". He was the surprise entry, a wild card with hopes of having his amateur club promoted up the national pyramid.

Many of the voters doubted his mettle. But he ultimately swayed the majority with a bit of savvy campaign bluster.

"I told them that if I won, my mother would wash all the kits each week," he recalled recently. He laughed. "And I won. So she did."

He upped his game in the race to become the most powerful man in world football.

In his campaign, flying the equivalent air miles of five times round the globe to meet Fifa's vote-wielders in person, Infantino showed himself to be not just a technocrat, but shrewdly aware of football's political heart - self-interest.

His slick manifesto promised all the correct themes - transparency, good governance, support for the reforms proposed as Fifa's life raft from its sea of disgrace. But large dollar signs were - literally - at the centre of it. Highlighting the "very significant increase" in money he is promising to the voting football associations, two pages were devoted to spelling out the cash on the table.

Each of Fifa's football associations in 209 territories was promised US$5 million (S$7 million) over four years, while the confederations - the six continental blocs - will be paid US$40 million.

There is another US$4 million regionally for youth tournaments and - personally very important to the delegates gathered in Zurich to vote - US$1 million for travel costs.

He pointedly noted that he began his campaign in Cairo and ended it in Cape Town - Africa's 54 associations are grateful recipients of Fifa investment, and usually decisive in a Fifa vote.

Infantino also successfully painted himself as the closest thing to a ground-breaking candidate there is in the race, a person who loves world football and knows how it operates but has never been directly involved in the murky landscape of patronage that has led Fifa into its continuing crisis.

To that end, although he rarely mentioned Sheikh Salman Ebrahim Al-Khalifa directly, Infantino drew out the obvious distinctions between him and his primary opponent, who is a member of Fifa's historically toxic executive committee and has been linked to allegations of human rights violations in Bahrain, his home country.

As it turned out, Infantino got to deliver his victory speech on Friday in Zurich. At about the same time, almost three hours' drive away in Nyon, the draw was being held for the Europa League. Had the dice fallen differently, he would have been conducting that draw.

A version of this article appeared in the print edition of The Sunday Times on February 28, 2016, with the headline 'How a stop-gap became the president of Fifa'. Subscribe
Topics:
More
Whatsapp Linkedin FB Messenger Telegram Reddit WeChat Pinterest Print Purchase Article Copy permalink