When Bernd Stange was unveiled as coach of the Singapore football team 35 months ago, it finally lifted the blanket of secrecy the Football Association of Singapore (FAS) had kept over his identity.

Yesterday, it was in a similar hush that he departed Singapore, on board a 9.05pm Emirates flight. 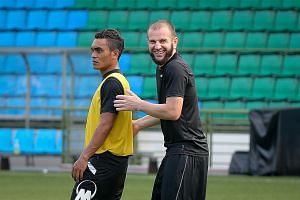 After he checked in at the first-class counter, a group of eight past and present FAS staff gathered over the next hour to bid Stange farewell. While a media scrum greeted his unveiling in 2013, only The Straits Times was there to witness his quiet exit.

No national players were present.

Reflecting on his stint, Stange, formerly the coach of East Germany, Belarus and Iraq, reiterated that he had given his all and called for more resources to be channelled to football.

BEARING THE BRUNT OF CRITICISM

Coach Bernd always defends his players and also seeks to take the pressure away from us - even if it leads to him being criticised unfairly.

He said: "Before I point my finger at anyone I always ask myself, 'What is it that I can do better?'

"When I was appointed, I set for myself a number of targets. We fell short of some goals and this is a regret for me and my players.

"But I think I gave my best and I leave behind an intact system with good young players coming up."

Asked about his plans, Stange said: "I'll take a break first but retirement is not on my mind. I'm still healthy and fit.

"I have only good memories of Singapore. Who knows, maybe I'll come back here?"

Not all will share his sentiments, with the tactician having divided opinion during his tenure.

He arrived with a good CV, promising an exciting brand of football, but also claimed he could tap into his network of contacts to arrange high-profile friendlies for the Lions. There was hope that he could take the four-time Asean Football Federation Cup champions to the next level.

Yet, apart from a 2-1 win over Syria in 2013 and a 0-0 draw against Japan last June, there was nothing much to shout about. The bulk of his wins came against lowly ranked teams like Myanmar, Laos and Cambodia.

His record stands at 15 wins, four draws and 16 losses, while his last act as coach was to guide Singapore into the 2019 Asian Cup third qualifying round, which starts next March.

Still, Stange continued to defend himself, saying: "I felt I could not move Singapore football forward fast enough. But these problems are above the FAS. We need stronger support."

He leaves Singapore 148th in the Fifa rankings, higher than the 165th spot when he took charge.

National assistant coaches Fandi Ahmad and V. Sundramoorthy will handle national team duties until a new man is appointed. It is believed the FAS could appoint a new coach before the Lions play in a four-nation tournament in June.

In a press statement, FAS president Zainudin Nordin thanked Stange for his contributions, including fielding several youngsters who have since became regulars in the national set-up.

National captain Shahril Ishak said: "Coach Bernd always defends his players and also seeks to take the pressure away from us - even if it leads to him being criticised unfairly. We have full respect towards Bernd, so it is with fondness that we say farewell."

At his farewell, FAS staff presented the former national coach with a gift - a Montblanc pen.

Perhaps, as he unwinds in the first-class cabin, Stange will wonder if he could have written his Singapore chapter that much better.