SINGAPORE - Arsenal finished sixth and missed out on Champions League qualification for the second season in a row despite scoring the joint-third highest number of goals (74) in the English Premier League last term.

One key factor for their failure was their leaky defence - the Gunners conceded the most goals (51) among the top seven clubs last season. And this is one statistic Arsenal want to improve on under new manager Unai Emery, says right-back Hector Bellerin.

The 46-year-old Spaniard is known to set up his teams defensively sound while being attacking-minded at the same time.

During his time with Sevilla, Emery led them to three consecutive Europa League titles from 2014-2016 and the statistics were impressive. The LaLiga club let in 10 goals from the knockout stages in their first triumph in 2014, nine in 2015 and only eight in 2016, proving the team's defensive prowess under Emery.

In an interview with The Straits Times on Friday (July 27) at the team's third kit launch at the Esplanade, Bellerin believes the new boss will improve the rearguard in his bid to lead the Gunners back to their glory days.

The 23-year-old Spaniard said: "At all the teams that he's (Unai) been at, it's all about being very competitive and really tight at the back.

"Strikers must also help to defend, and that can help us a lot because defending is not just for the back four and the goalkeeper. It starts from the striker and, hopefully, we can get this solidity and we can compete like his teams have always done." 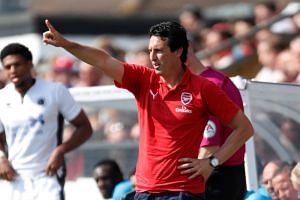 Football: Speed demon Pierre-Emerick Aubameyang in a race to win trophies with Arsenal

Bellerin also stressed the importance of giving the team time to adjust to Emery's style.

"The important thing at the start is to allow everyone to get in sync with the new coaches and staff. If we do that, everything is going to work and we can challenge for very big things in the future," he said.

"Arsenal are a great club and we need to put the club where we deserve to be. It's a new era and it's up to us to make it happen."

Emery has wasted no time in beefing up the defence with the signings of German goalkeeper Bernd Leno and experienced defenders in Sokratis Papastathopoulos, 30, and Stephan Lichtsteiner, 34.

The 1.86m Papastathopoulos, who joined Arsenal from Bundesliga club Borussia Dortmund for an undisclosed fee, is confident his arrival will shore up the backline.

He said: "It is important for us that we don't concede a lot of goals and to improve as a team in defence.

"I feel it's the right moment for me to enter the EPL. For defenders, 30 is the best age, we have enough games and experience and we know exactly what will happen and what we can do."