SINGAPORE - The Arsenal players may still be getting to grips with Singapore's hot and humid weather after arriving here for the Barclays Asia Trophy just 48 hours earlier.

Yet, that proved to be no hindrance as they ran out convincing 4-0 winners over a Singapore Select XI at the National Stadium in front of a watching crowd of 29,867 on Wednesday evening.

Chuba Akpom was the star of the show with a hat-trick and Jack Wilshere also added a penalty to round off the scorers for the night.

V. Sundramoorthy’s team barely offered any attacking intent and were set up to defend deep against Arsenal, who had attack-minded players with the likes of Jack Wilshere and Alex-Oxlade Chamberlain starting in midfield. 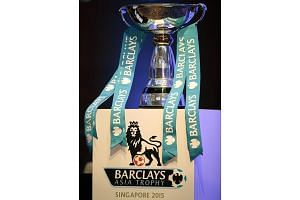 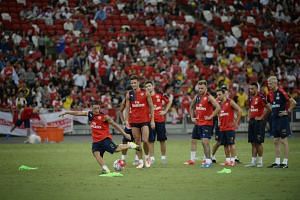 Singapore captain Izwan Mahbud, whose show-stopping 18 saves earned Singapore a shock 0-0 draw with Japan in their World Cup qualifier last month, was easily the busier of the two custodians. He was forced into making a series of acrobatic saves throughout the match. Madhu Mohana in front of him was also a rock at the back, making vital blocks and clearances to prevent the scoreline from blowing out even more.

Akpom was a lively presence up front for the Gunners and the Singapore backline's failure to clear a loose ball in the area saw the 19-year-old pounce with a speculative shot that beat Izwan and broke the deadlock in the 30th minute.

Arsenal, who were wearing their second away kit, continued attacking down the flanks in the second half. Good work from Mathieu Debuchy down the right saw him fouled by Sirina Camara to earn a penalty in the 59th minute. Wilshere stroked the resulting spot-kick home to make it 2-0.

More young blood in midfielders Gedion Zelalem, Dan Crowley and Jon Toral was brought on for a run out and it was Toral who earned the third goal after being brought down by Izwan. Akpom duly sent the 'keeper the wrong way from the penalty spot to get his second goal in the 76th minute to make it 3-0 to Arsenal. 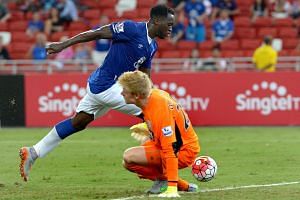 Another substitute, last season’s breakout star Hector Bellerin, got to the byeline barely three minutes later. He then delivered an inviting cross for Akpom to complete his hat-trick with a thumping header from point-blank range.

Arsenal last set foot on a local pitch back in 1991, when they drew 1-1 with Liverpool in the Caltex Cup, eventually winning on penalties 4-3.

The winners of the match will play Everton in the final for the Barclays Asia Trophy on Saturday. The Toffees had prevailed over Stoke City in the tournament opener, winning 5-4 on penalties after a goal-less draw between the two teams at the end of normal time.