MANCHESTER (REUTERS) - Manchester City manager Pep Guardiola said he never imagined his team would run away with the Premier League title as they are doing this season.

City are 18 points clear of second-placed Liverpool after beating Chelsea 1-0 at the Etihad Stadium on Sunday (March 4) and need just four wins from their final nine games to be sure of the title.

Asked whether he felt such a season of dominance could be possible, Guardiola said: "Before? No way. No way, no. Who could believe it? I think if you ask the players, the players (couldn't believe it) neither," he said.

"In terms of not just the results but the way we played, today was another demonstration. We showed the same desire as at Stamford Bridge. That is what pleases me the most.

"To have the distance, 25 to Chelsea, 33 to Arsenal. Tottenham, Liverpool and United, they have had good results and kept a good pace. We are so far so good... I think it is a consequence of the way we play. The way we play today is a bit similar to what we have done (this season)," he said.

With nine games remaining, City who are on 78 points, have a chance to become the first team to break the 100-points barrier in the history of the English top flight.

Guardiola said, though, that his focus was not on records but on securing silverware. 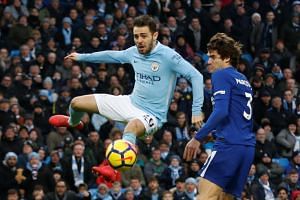 "We are not going to play for the records. Records are always a consequence of what you have done but they are not the main thing.

"What really matters is to be champions. I never spoke with the players about the records. Next week at Stoke we are going to try and play like we play all season. After, at the end, we will see," he said.

Guardiola has had a tense relationship at times with Argentine striker Sergio Aguero but he said the forward was playing the best football since the Spaniard took over at the club last season.

"Since we were together here with Sergio, the last month and a half, two months, is the best Sergio I have seen. He doesn't lose one ball, he makes a movement in behind, he is the first man to help. Okay, he didn't score - he will score in the future. It is no problem, he did really well."