LONDON (REUTERS) - Manchester City manager Pep Guardiola hopes his players return injury-free from the international break this month for a hectic run of fixtures that could define the Premier League champions' season.

City play eight fixtures in 29 days after the international break with the club fighting on three fronts - the league, FA Cup and Champions League - as they seek a quadruple, having already won the League Cup last month.

They are currently second in the league with a game in hand, two points behind leaders Liverpool, while Guardiola's side also advanced to the FA Cup semi-finals and the Champions League quarter-finals.

"I pray that they come back fit," Guardiola told City's website. "They have to go to their national teams... enjoy and play for their country, but I hope they can come back fit like they are now.

"I just want them fit and here... With the fixtures we have in April, we need everybody, it's crazy."

Guardiola confirmed those not involved with their national teams would have a week's rest before returning to training but counted on his injured players to make a comeback and contribute in any way possible.

"Everybody is going to play and Kevin (De Bruyne), Fernandinho, John (Stones), Benjamin (Mendy) - they are all going to be back soon and we need them. Even if some play 10 or 15 minutes here and there," Guardiola added. 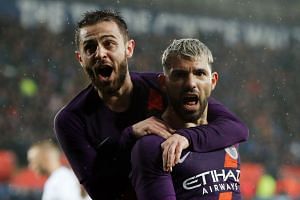 "We need everybody because we have got to this stage where we are still in with a chance of winning three more trophies because of everybody. Not just 11 players, but everyone."

City's next game is a league trip to relegation strugglers Fulham on March 30.