Aguero struck in the 63rd minute to secure Manchester City's 1-0 win away to Burnley at Turf Moor on Sunday (April 28) that saw the English champions return to the top of the table.

City's 12th successive league victory took them to 92 points, one clear of second-placed Liverpool with both clubs still having two league matches each to play this season.

Aguero has managed 230 goals in eight years with City, making him far and away the club's all-time top scorer, and the 30-year-old Argentina striker has played a key role in the three league titles they have won during that period.

"He is a legend; he does that all the time, score important goals for us," Guardiola said. "He is an incredible player."

City remain on course to finish the season with an unprecedented domestic treble; having won the League Cup in February, they return to Wembley to play Watford in the FA Cup final on May 18.

Failure to defeat Burnley would have handed Liverpool the initiative in the title race, but City overcame spirited opposition to keep matters in their own hands.

Aguero, who had seen an earlier chance blocked by Tom Heaton, scored after turning on to Bernardo Silva's low cross and fashioning a shot that Matt Lowton looked to have blocked, only for the ball to loop up off the defender's chest and cross the line before he could clear it - although goal-line technology was needed before the goal was awarded. 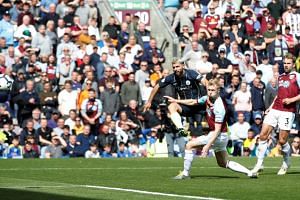 City were denied a second by a superb goal-line clearance from Ben Mee, who stretched to clear off the line after substitute Gabriel Jesus had rounded Heaton.

Guardiola was delighted with the solidity of his team, who won without their key midfielder Fernandinho and the creativity of Kevin de Bruyne.

"Here in the most typical English stadium, we didn't concede one corner," Guardiola said.

"It is not easy, especially after our (Champions League) defeat against Tottenham, but our reaction has been outstanding, without Kevin, without Fernandinho, to come here and play the way we played."

The former Barcelona and Bayern Munich boss added: "There are just two games left. It is tough for Liverpool, it is tough for us - with 91, 92 points, still not champions."

Guardiola suggested that City's task at Turf Moor was made tougher by the dryness of the pitch, although he made clear this was not a complaint.

"In the first half, the pitch was so dry and we had problems moving the ball because the grass was so high," Guardiola explained.

"But when the opponents come to the Etihad Stadium, we put the stadium like we want. When we go away, they do what they want. That is why I like the Premier League."

Burnley had little more than 30 percent possession, yet still had the best first-half chance, with Chris Wood failing to control Jeff Hendrick's through ball and allowing goalkeeper Ederson off his line to smother.

City, who piled intense pressure on Burnley's goal in the first 20 minutes of the second half, did sit off to protect their lead after that - a source of pride for Burnley boss Sean Dyche.

"In the closing minutes, I heard Pep Guardiola screaming 'get it in the corner'," said Dyche.

"Even the best sides have to do it. I thought it was refreshing to hear a top manager scream that to his players."