LONDON (AFP) - Pep Guardiola says VAR will only be worthwhile if decisions taken by the controversial system are always correct after Manchester City's 5-0 win at West Ham was interrupted by several replay reviews.

Guardiola's side kicked off their Premier League title defence with a confident display as Raheem Sterling's hat-trick and goals from Gabriel Jesus and Sergio Aguero demolished the Hammers.

But City's ruthless finishing wasn't the main talking point in east London as VAR made a first major impact on a Premier League match.

The Video Assistant Referee technology is being used in the Premier League for the first time this season after featuring in the FA and League Cups in England last term.

The system was given quite a workout at the London Stadium, with several decisions reviewed, including City's Jesus having a goal disallowed for offside against Sterling, while Aguero was able to score a retaken penalty after his initial saved spot-kick featured West Ham encroachment.

There was also VAR approval for Sterling's second goal and an early West Ham penalty appeal was turned down by the system.

The offside decision against Sterling was extremely close and Guardiola disagreed with the call, insisting the constant interventions are only worth the hassle if they are always right. 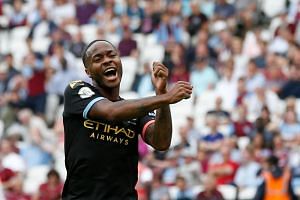 "Rules are rules, no problem. But I will be upset if it's something that is right and it's disallowed. Then it will be not good.

"The only thing I'm concerned is when VAR makes a mistake. It happened quite often in the past, then it is better for the referee to make decision."

Guardiola has already experienced the agony of VAR overturning a key decision when Sterling had what would have been a last-gasp Champions League winner against Tottenham ruled out for offside last season.

Since then, the Spaniard has joined the rest of his Premier League managerial counterparts for a VAR demonstration in London.

He remains hopeful the system will prove to be fairer in the long-term, even if it needs to be quicker to make decisions after both teams had returned to their kick-off positions before Jesus's goal was eventually disallowed.

"After what happened against Tottenham in the quarter-finals last season, we were there, 60,000 people jumping with joy, then one second later we lost because it was offside. Now I'm used to these situations," he said.

"We had a managers' meeting in London last week and they showed us how VAR will work with all the cameras and angles.

"You have to be mentally strong when VAR is not on our side. You think at 3-0 the game is almost over but at 2-0, it's completely different.

"It is going to change the dynamic not just for the team but for the spectators. It will be a good lesson for our future."

Regardless of the latest VAR issues, Guardiola was content with the way City recovered from a lethargic first 15 minutes to put West Ham to the sword.

It was the ideal response from the champions after title rivals Liverpool crushed Norwich 4-1 in their season opener on Friday.

"Perfect start? It terms of the result yes, in terms of the performance no. In the first half we were sloppy with our passes," Guardiola said.

"We didn't have the rhythm but that is normal in the first game. In the second half we settled down." Sterling stole the show with a display of lethal finishing that convinced Guardiola the England winger could thrive as a central striker.

"For me a striker would be an incredible position for him. I know the quality of the player, the consistency," he said.