MADRID (REUTERS) - Atletico Madrid recovered from their defeat by Barcelona in last week’s top-of-the-table clash by crushing Celta Vigo 3-0 at home in La Liga on Sunday (March 11) to reduce the gap with the Catalans back down to eight points.

France forward Antoine Griezmann broke the deadlock a minute before halftime to move on to 16 league goals for the season and draw level with Celta forward Iago Aspas as the fourth top scorer in the top flight.

Griezmann then set up the second goal in the 54th minute with a pinpoint through ball to Spain international Vitolo, who scored his first Liga goal for Atletico since his move from Sevilla.  Moments before, Celta midfielder Nemanja Radoja had crept into the area undetected to meet a cross but sent the ball against the near post.

Angel Correa then replaced Vitolo from the bench and rounded off the scoring in the 63rd minute with a powerful run into the area before firing into the bottom corner. The effort left coach Diego Simeone punching the air exuberantly in celebration.

“As long as there are points left to play for, we will go all out for them,” goalscorer Vitolo told reporters.  “Barca have a good advantage, but anything can happen. It was very important to get these three points, we played well and deserved to win.”

Atletico goalkeeper Jan Oblak returned to the team after a groin injury kept him out of the Europa League last-16 first leg win over Lokomotiv Moscow on Thursday.  However, the Slovenian did not seem to be fully fit and was unable to take goal kicks, with Uruguayan defender Jose Gimenez taking them instead.

Diego Costa was forced off with 10 minutes remaining after having his ankle trodden on by Celta’s Sergi Gomez and was limping as he left the pitch. 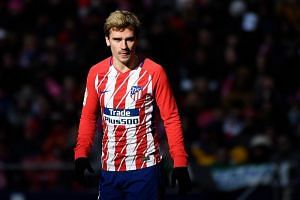 Football: Griezmann "must play for his life" at Atletico - Gabi

“Costa was feeling uncomfortable after the knock he received but the doctor will be able to inform everyone better than me,” said Simeone.  “The scoreline makes it look like it was easy but we had to put in a huge effort and play very well to win today.”

Atletico are second in the standings on 64 points after 28 games while leaders Barcelona have 72 after winning 2-0 at Malaga on Saturday and third-placed Real Madrid have 57.

Also on Sunday, Villarreal won 2-0 at relegation-threatened Las Palmas with second-half goals from Carlos Bacca and Nicola Sansone to climb above Girona into sixth place, just a point behind Sevilla in fifth.

Las Palmas are 18th, four points adrift of safety after 17th-placed Levante snapped a run of 15 games without a win with their 1-0 victory at Getafe on Saturday.  Espanyol fought back from a goal down at home to beat Real Sociedad 2-1 and leapfrog the Basques into 12th place in the standings.