Griezmann now has 10 goals in his last 11 games, his latest helping Atletico register their sixth win in seven league matches. The only dropped points came in a respectable draw away to Sevilla.

Saul Niguez tapped in a second before half-time at the Wanda Metropolitano to complete an impressively smooth victory over a Getafe side that had lost only once, to Barcelona, in 12 matches.

Renowned for their tenacity, Getafe also finished with nine men after Djene Dakonam and Leandro Cabrera were both sent off in the final minutes.

It is no coincidence that Griezmann's surge has coincided with a consistent run for his team, which looks timely too, with Real Madrid in La Liga and Juventus in the Champions League both to come at the start of next month.

With those games in mind, Diego Simeone will hope the thigh strain that forced his captain Diego Godin off at the interval is not serious. Atletico described the substitution as a "precaution".

Barcelona coach Ernesto Valverde had said earlier on Saturday that he considers Atletico the greatest threat to their title hopes from the Spanish capital and it is hard to argue given Diego Simeone's men are now just two points behind, eight closer than Real. 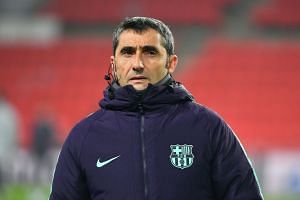 Barca and Real both have games in hand to come on Sunday, the former away to Girona and the latter up against Espanyol.

Griezmann could have been playing for the Catalans had his decision last summer been different but instead he is fast-becoming the sharpest thorn in their side, driving Atletico almost single-handedly at times to a sustained title challenge.

Alvaro Morata could yet join this month, even if reports in the Spanish press have suggested a deal is proving difficult to close. With Griezmann in this sort of form and Diego Costa expected back from injury next month, perhaps Atleti are not feeling quite so in need.

The Frenchman's shot in the 27th minute was too quick for goalkeeper David Soria, who was taken by surprise and beaten at his near post. Thomas Partey did well to battle through midfield and it was his pass that had teed up Griezmann on the edge of the area.

Thomas was key again to the second, his lofted pass out wide allowing Lucas Hernandez to volley first-time into the six-yard box, where Nikola Kalinic should have finished. His effort was parried out and Saul slid in the rebound.

Godin departed during the interval, replaced by Juanfran, and Getafe could have pulled one back when Jose Gimenez misjudged a ball over the top. Angel Rodriguez nipped in but Gimenez did just enough to recover.

Getafe's frustration built and boiled over at the end as Djene Dakonam was shown a second yellow card in the 88th minute for a rash challenge on Thomas Lemar and then Leandro Cabrera followed him three minutes later for applauding the referee.

It was a feisty end to a comfortable Atletico win.