He says he can devote more time to his family and more focus on his English Premier League club Chelsea.

The 31-year-old French-born forward stands down from national duty with 75 caps, the first coming in 2009 when he marked his debut in a 2010 World Cup qualifier against Peru with a goal.

Last year's 2-1 win over Nigeria at the 2018 World Cup was to be his last appearance for his country. He leaves with a 35-goal haul.

Higuain exits the international stage having lost out on World Cup glory in 2014 when Argentina fell to Germany in the final and defeats in the finals of both the 2015 and 2016 Copa America.

Despite coming so close to a major trophy he bows out with his head held high.

"To play in three finals and lose them is not a failure," he told TV Fox Sports Argentina.

And he had a message for critics of his performances playing for Argentina.

"People remember your mistakes, not what you've accomplished.

"Those who attacked will have almost certainly cried for joy when I scored against Belgium to put us through to the semi-finals (at the 2014 World Cup in Brazil). 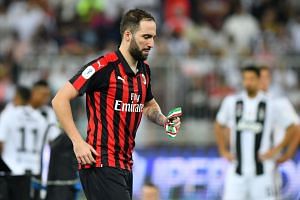 He added: "Obviously when the criticism turns nasty it hurts everybody. I gave everything to the team. My family has suffered more than me."

While his international trophy chest may be bare, at club level he won two Spanish La Liga titles with Real Madrid in 2007 and 2008 and he helped Juventus to be crowned Italian champions in 2017 and 2018.

Since arriving at Stamford Bridge from Juventus on loan in January, he has scored just three times in 10 appearances.