COLOGNE, Germany (REUTERS) - Germany's Lars Stindl scored a last-gasp equaliser to rescue a 2-2 draw against France in a friendly on Tuesday (Nov 14) as the world champions stretched their unbeaten run to 21 matches.

France twice led through Alexandre Lacazette, who netted either side of Timo Werner's leveller, and looked set to triumph as they had in Germany's last defeat in a Euro 2016 semi-final.

But Stindl struck in stoppage time to rescue the hosts.

Both teams having qualified for next year's World Cup in Russia and are considered among the title favourites.

Germany coach Joachim Loew was eager to test his squad and made six changes to the team that drew 0-0 against England at Wembley on Friday, including three in defence.

But the hosts struggled under early French pressure, with the speedy Kylian Mbappe and Blaise Matuidi a constant threat.

Lacazette, replacing injured forward Olivier Giroud, forced a good save from Germany keeper Kevin Trapp with a powerful shot but went one better in the 34th minute, tapping in from close range after superb work from Anthony Martial.

The Germans woke up after the break and substitute Antonio Rudiger should have levelled when he was set up by Julian Draxler in the box. 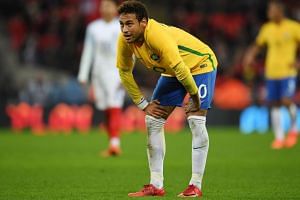 Instead it was Werner who grabbed the equaliser in the 56th minute with his seventh goal in his 10th international as he finished off a quick break launched by Mesut Ozil.

Toni Kross then hit the bar in the 70th as the Germans looked to be in complete control before another quick French break earned the hosts their second goal.

Martial should have added a third late in the game but Trapp did well to deny him as the forward charged into the box before Stindl's added-time goal salvaged a draw.