LONDON (REUTERS) - France won the 2018 World Cup by regenerating their squad and previous holders Germany must now do the same, the countries' respective coaches said on Sunday (Sept 23).

Deschamps, who in July became one of only three men to win the competition as both player and coach, said it was necessary to rejuvenate the French side that lost the 2016 European Championship final on home ground to Portugal.

"In two years things change," he said through an interpreter.

"You have to rethink and renew. It's important to have players with experience but it can be hard to find the balance between experience and youth.

"We had 14 out of 23 players who had never played at the Euros or a World Cup. But eight of the 11 in the final had done." His overall impression of the 2018 finals was that "all teams were extremely well prepared in terms of fitness and able to play at high intensity, so that as well as creativity they need nowadays to be true athletes". 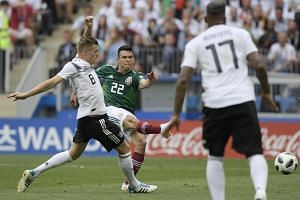 Germany, Brazil stumble in World Cup openers: Results and fixtures at a glance

Deschamps defended one of the younger members of his team, Manchester United's Paul Pogba, who one delegate said had been more impressive for France than his club.

"The rest of the world had an image of him that didn't reflect who he is, of someone very individualistic who only thinks of himself," he said. "That's not true at all." Loew said Germany, who went into the tournament as holders but finished bottom of their group, had more or less the same group of players for a long period, some of them appearing in three World Cups.

"Maybe after this long time at the top you don't have the same passion or greed to win the title," he said through an interpreter.

"So now we have to think about how we integrate some new players over the next two to four years to get some new blood into the team and set new aims for what we want to do."