MANCHESTER, United Kingdom (AFP) - Pep Guardiola launched a scathing attack on the standard of refereeing over both legs of Manchester City's chastening Champions League defeat against Liverpool in the wake of Tuesday's (April 10) match.

Guardiola's side were condemned to a 5-1 aggregate exit after losing 2-1 to Liverpool in Tuesday's quarter-final second leg at Eastlands.

But the City manager felt it could have been a different outcome if decisions from the officials had gone his team's way in both matches.

Liverpool took the lead in the first leg with a goal that came from Mohamed Salah's offside run, while City were denied what might have been a crucial second goal in the return leg.

After losing the first leg 3-0, City were leading through Gabriel Jesus's opener and Guardiola thought they had scored again when Leroy Sane prodded home.

But the strike was wrongly ruled out for offside and Liverpool went on to win thanks to goals from Salah and Roberto Firmino.

Guardiola was incensed by the decision, earning himself a seat in the stands as he was sent off at half-time for his furious on-pitch rant at referee Antonio Miguel Mateu Lahoz. 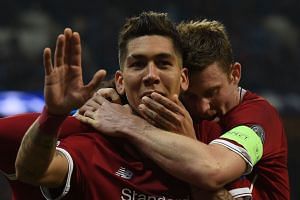 "I said it was a goal when the ball was passed to Leroy Sane. That's why he sent me off. It would have been different to go in 2-0," Guardiola moaned.

"In this competition the teams are so equal and the influence of refereeing decisions is so important." Mateu Lahoz was criticised by Guardiola for not awarding City a penalty against Monaco last season.

City recovered to win that game 5-3 but lost the tie.

"The referee is a special guy, he likes to be different. Whenever people see the things, he will decide the opposite," Guardiola said.

City's European exit capped a wretched week, which also saw them blow the chance to clinch the Premier League title on Saturday when Manchester United came from two goals down to beat their bitter rivals.

With the title still to be wrapped up, Guardiola called on his players to make one last push at the end of what had been a fabulous campaign until the last seven days.

"Hopefully, they can represent England well in the semi-final.

"We've had 10 amazing months. We have to recover mentally for the six games remaining.

"Our 10-month winning spell is exceptional. You have to analyse game by game." Liverpool are back in the Champions League semi-finals for the first time in a decade.

Reds boss Jurgen Klopp admitted Liverpool rode their luck during City's first-half blitz, but he praised his players for sticking to the task.

"It was quite difficult tonight, again especially with the start. This wonderful goal that we served them on a plate," he said.

"I was expecting something like that but I liked the reaction immediately after that.

"City took all the risks they could take, we needed a bit of luck and a disciplined defending formation. I was not overly happy at half-time to be honest.

"They could've scored two or three goals in the first half. But it's not about perfection it's about the result, the character, the mentality, really fighting for the result.

"We defended well, it's not our best game but we deserved it at the end."