(REUTERS) - James Milner scored an 84th-minute penalty as Liverpool overcame a terrible start and survived a late scare to win 2-1 at Swansea City on Saturday (Oct 1) and move second in the Premier League.

Juergen Klopp’s side had looked second best for much of the game, but if good teams are often judged on their ability to pick up points when not playing well then Liverpool took another step forward at the Liberty Stadium.

Swansea, who are still without a league win since the opening day of the season, deservedly took the lead after eight minutes when Leroy Fer poked home.

It took until the second half for Liverpool to wake up and they levelled through Roberto Firmino’s header nine minutes after the restart before taking the lead when Milner coolly side-footed his penalty down the middle of the goal.

There was one last heart-stopping moment for the visitors, however, when Swansea’s Mike van der Hoorn found himself unmarked four metres out in stoppage time, but pulled his effort wide, leaving Liverpool to celebrate a fourth straight win.

“You need to show every week that you ready to fight for the result,” Klopp said after his side moved two points behind leaders Manchester City, who play Tottenham Hotspur on Sunday. 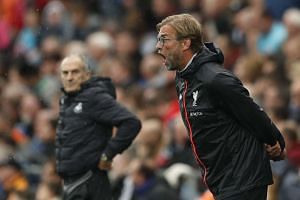 Defending set pieces has been an ongoing weakness for Liverpool and Swansea exploited it early when a corner from the left was headed back across goal by Borja Baston for an unmarked Fer to poke home his fourth goal of the season.

There was no immediate revival from Liverpool and an enthused Swansea should have added a second when Baston headed a Sigurdsson free kick wide from close range.

It took until the second half for the momentum to switch as Liverpool levelled with their first real chance of the game.

A Liverpool free kick was cleared but the loose ball was looped back into the box by Jordan Henderson and Firmino was in acres of space to head into the bottom corner.

It looked like Swansea might hold out but as the seconds ticked away Angel Rangel charged into the back of Firmino and Milner stepped up to score his fourth penalty in the league this season.

Van der Hoorn’s miss condemned Swansea to a fourth straight defeat in all competitions, heaping further pressure on manager Francesco Guidolin and leaving them fourth from bottom in the table.

“Our team is good but we are not in a good moment,” said Guidolin. “The players gave me a good answer. Our relationship is good.”