FLORENCE (AFP) - Fiorentina returned to action a week after the sudden death of captain Davide Astori in a home game on Sunday (March 11) played in a poignant atmosphere.

The previous Sunday's Italian Serie A fixtures were postponed after Astori's body was found in his hotel room ahead of an away game against Udinese.

After emotional scenes on Friday night as Roma, one of Astori's former clubs, beat Torino, and a commemoration on Saturday at the Verona derby, Fiorentina kicked off Sunday's Serie A action at their Artemio Franchi stadium against last-place Benevento.

For the warmup, all the Fiorentina players and coach Stefano Pioli wore shirts bearing the number "13" and the name "Astori".

The ground was packed on three sides, only the space reserved for visiting fans was largely empty.

One banner in the crowd read "Ciao captain", another "Our captain forever" and purple smoke from flares to match the colour of Fiorentina's shirts filled the sky.

The screens played a video homage to the club's late skipper. The flags above the curved stands at either end of the long, narrow stadium flew at half mast.

The stadium announcer included "Number 13, forever our captain, Davide Astori" in the line-up.

A post-mortem examination found that Astori, who was 31, most likely died from a cardiac arrest linked to the slowing of his heart rate. 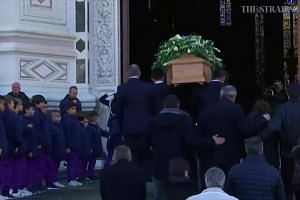 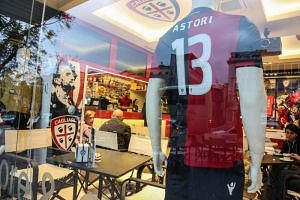 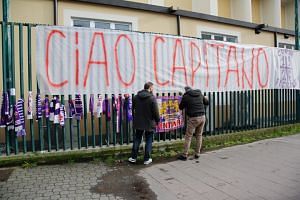 In a draining week, Fiorentina players and fans as well as stars from other Italian clubs attended Astori's funeral in Florence on Thursday, including Italy goalkeeper Gianluigi Buffon and his Juventus team-mate Giorgio Chiellini who came to pay their respects to the defender, who captained his club and played 14 times for his country.

On Sunday, as the Fiorentina and Benevento teams re-emerged for the match, accompanied by mascots in the shirts of Fiorentina or another of Astori's clubs, Cagliari, all the advertising hoardings round the pitch turned purple and bore only the words "Davide Astori" and the club crest.

The pre-match ceremony began with the two sides lining up as Italian star Jovanotti sung his hit Terra Degli Omini. Players, from both teams, wept.

The Fiorentina players held a long, home-made, banner saying "Ciao Davide". Both teams had the same phrase sewn on their left shirt shoulders. The words were repeated on many of the banners in the crowd. Others read "Linked forever", "Florentine forever", "Ciao Davide" and "True captain, man from another time."

In the top deck of the Curva Fiesole, home of Fiorentina's Ultras, all the fans held purple, white and red flags spelling "Davide".

Fans remained eerily silent as the teams shook hands, the referee conducted the coin toss and then the players reassembled in the centre circle for a formal silence.

As that ended, some in the crowd started a brief "Davide" chant.

Before kick-off, fans in the main stand released a cloud of purple and white balloons that floated heavenwards.

The match finally started six minutes after the scheduled kick-off.

The advertising billboards switched to their normal slogans.

There remained one more planned commemoration.

After 13 minutes, Astori's shirt number, the action simply stopped, the players and match officials, like the fans, stood and clapped for 60 seconds.

The supporters in the Curva Fiesole held up their flags again and, as the clapping ended, they waved them.

Eleven minutes later, as the rain began to fall, Fiorentina, who had been applying steady pressure, took the lead.

Vitor Hugo, who had stepped into Astori's place in the centre of defence and wears 31, the reverse of Astori's number, leapt to meet a high ball and headed it powerfully into the net. Then he grabbed a T-shirt printed with a picture of Astori and held it up as the crowd applauded.

As the rain intensified, the crowd chanted: "un capitano, c'è solo un capitano!" ("One captain, there's only one captain!")