MANCHESTER (REUTERS) - Fifa has rated the joint Australia-New Zealand bid for the 2023 Women’s World Cup as the best to host the tournament.

The world football governing body said in a statement on Wednesday (June 10) that it had received official "bid books" from three contenders - Colombia, Japan and a joint New Zealand-Australia bid. It will decide on which of the bids during an online meeting of its ruling council on June 25.

The organisation’s bid evaluation report gave the Australia-New Zealand bid an average score of 4.1 out of 5, with Japan on 3.9 and Colombia 2.8.

Brazil withdrew its candidacy on Monday, saying the government did not consider it wise to offer financial guarantees in the midst of the coronavirus pandemic.

The 2019 tournament in France broke records in terms of television audiences and was seen as the most high-profile edition so far, with the United States beating the Netherlands for their fourth title.

"The quality of the bids is testimony to the tremendous momentum women's football has generated and we are looking forward to building on this to take women's football to the next level at the Fifa Women's World Cup 2023," said Fifa secretary-general Fatma Samoura. 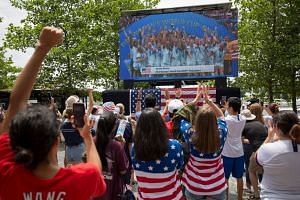 The bid evaluation report said all three proposals met the requirements but questioned whether the Colombian bid had the necessary financial backing.

It said that Colombia would need “a significant amount of investment and support from both local stakeholders and Fifa in order to elevate organisational conditions to those of the other two bids.

“Based on the documentation submitted and the information provided, it is not clear if this level of investment will be available”.

The report said the Australia-New Zealand bid appeared to “present the most commercially favourable proposition”.

Japan’s bid was praised for the quality of venues and infrastructure along with the ability to attract television audiences across Asia.