ZURICH (REUTERS) - Football's world governing body Fifa said on Monday it was in "regular contact" with the organising committee of the 2022 World Cup in Qatar, though it did not comment directly on the diplomatic situation involving the Gulf State.

Saudi Arabia, Egypt, the United Arab Emirates (UAE) and others severed ties with Qatar on Monday, accusing it of supporting terrorism and opening up the worst rift in years among some of the most powerful states in the Arab world.

Fifa said in an e-mail statement that it was "in regular contact with the Qatar 2022 Local Organising Committee and the Supreme Committee for Delivery and Legacy handling matters relating to the 2022 Fifa World Cup".

"We have no further comments for the time being," it added.

Qatar's local World Cup organising committee and the Asian Football Confederation (AFC,) which organises international matches in the region, both declined to comment.

Qatar's national team are still involved in the qualifying competition for the 2018 World Cup in Russia and are bottom of their group with four points from seven games, with matches against South Korea, Syria, and China still to play.

There is a very remote chance they could still finish third in the group and qualify for a play-off match against the team that finishes third in the other Asian qualifying group, with both Saudi Arabia and the UAE among potential opponents.

The 2022 World Cup is the centrepiece of a carefully crafted strategy to project Qatar on to the global stage via sport. 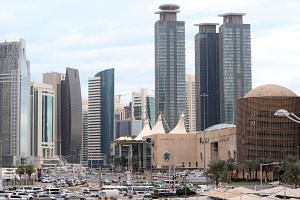 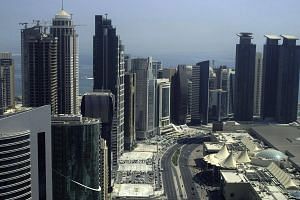 The ongoing diplomatic row could impact its preparations.

In the lead-up to the tournament, the country is scheduled to host multiple events across many different sports, aimed at improving infrastructure and expertise.

This year, it is organising 72 events, 39 of which will be international competitions.

It has already hosted the 10th Artistic Gymnastics World Cup and an International Association of Athletics Federations (IAAF) Diamond League athletics meeting, and a FINA Swimming World Cup is scheduled for September.

Swimming governing body FINA did not respond to requests for a comment on Monday as to whether it would still go ahead.

Top-level modern pentathlon, sailing, squash and show jumping events are also scheduled for later in the year when temperatures cool.