MADRID (AFP) - Fernando Torres struck his fourth goal in as many games as Atletico Madrid moved level with Barcelona at the top of La Liga with a routine 3-0 win over Granada on Sunday.

Koke ensured Atletico would have no hangover from their efforts in dispatching Barca from the Champions League in midweek as he swept home the opener on 15 minutes before teeing up Torres to drive one home just before the hour mark.

Substitute Angel Correa rounded off the scoring with a cool finish seven minutes from time.

Victory takes Atletico back a point clear of third-placed Real Madrid and level with Barca on 76 points with the Catalans aiming to halt an alarming dip in form later at home to Valencia.

Atletico were met by a euphoric full house at the Vicente Calderon just four days after dumping Barca out the Champions League at the quarter-final stage for the second time in three seasons. 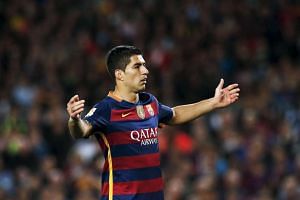 And Koke almost got the hosts off to the perfect start when he flashed a shot inches over from Juanfran's cut-back in the first minute.

However, the Spanish international was deadly accurate with his next chance as he rifled home his fifth goal of the season after Torres's initial effort had been blocked.

Atletico's rock-solid defence was rarely troubled as they held out for a 30th clean sheet of the season, but Ruben Rochina was inches away from an equaliser on the half hour mark when he smashed a long-range shot against the post.

All of Torres's goals in his last four outings have come from Koke assists and that combination worked a treat once more for Diego Simeone's men when the former Liverpool and Chelsea striker latched onto an inch-perfect pass before lifting the ball over the onrushing Andres Fernandez.

Correa was one of those introduced and the Argentine international showed great composure to slot home the third from Saul Niguez's flick-on.

Elsewhere, Athletic Bilbao moved to within six points of Villarreal in the fight for the fourth Champions League place with a hard-fought 1-0 win at Malaga thanks to Raul Garcia's second-half header.

Villarreal lost 2-1 at Rayo Vallecano in a result with huge ramifications at the bottom of the table.

Miku's brilliant header handed the Madrid side all three points after Adrian Lopez had cancelled out Javi Guerra's early opener for Rayo.

Sevilla will almost certainly have to win a third consecutive Europa League to make it back into the Champions League as they were held 1-1 at home to Deportivo la Coruna to stay 11 points behind Villarreal.