No special treatment for club, says Zainudin, while being prepared to 'explore possibilities'

They have been credited with bringing the buzz back to local football with ambitious plans, such as signing marquee name Jermaine Pennant, the former Arsenal and Liverpool winger and snapping up eight LionsXII players before the penny dropped that they are experiencing cash-flow problems.

Yesterday, Football Association of Singapore (FAS) president Zainudin Nordin reiterated the governing body's stance that teams have to abide by established processes, and that there will be no special treatment. Not even to a club of Tampines Rovers' stature.

Speaking on the sidelines of the RHB Singapore Cup 2016 draw yesterday, he said: "It's easy to point fingers, but the FAS is an Institution of Public Character. We are goverened by rules and regulations, and the S-League has its processes that clubs must abide by." 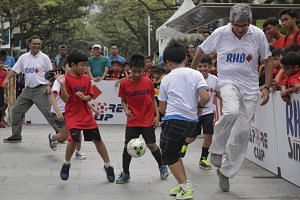 Tampines chairman Krishna Ramachandra had admitted last week that the club are struggling with their finances, with the Stags' projected expenses this season to exceed $2 million, compared to around $1.5 million for the average S-League club.

The lawyer, who became the Stags' chairman last November, had since asked the FAS for advances on subsidies due to the club.

Clubs know, at the beginning of the season, how things work. It's not like the S-League existed one year ago, it has existed for 20 years... whenever we do things, there are processes, people have to submit documentation.

ZAINUDIN NORDIN, FAS president, on its disbursement of subsidies to S-League clubs during the course of a season.

The signing of Pennant and the LionsXII players, all of whom draw higher salaries than the average S-League player, have contributed to the inflated budget.

Responding to Krishna's claims that requests to the FAS for advances on subsidies were "legitimately due," Zainudin said: "On our side, everybody has gotten what we are supposed to give them in the month of March.

"These are the processes that Tampines also have to go through."

The former Member of Parliament added: "We don't hold the money in advance, the money comes to us only after we submit the documents, after which (FAS sponsor) Tote Board will give us the money."

Zainudin also rejected the notion of any corporate governance issues on the part of the FAS and S-League: "It's the same process for all nine teams - why is it that eight work and one doesn't? You have to be fair to us... clubs know, at the beginning of the season, how things work.

"It's not like the S-League existed one year ago, it has existed for 20 years...whenever we do things, there are processes, people have to submit documentation. "

However, with Krishna admitting that he underestimated the challenges of running the club, Zainudin gave assurances that the FAS will "engage and talk to them, explore possibilities and use our network to help."

The FAS supremo said: "We will think through. They are just like any independent autonomous club, they have to think through too.

"We must also remember that there's only so much people can do, but I think working together, you never know, there will always be solutions."