SINGAPORE - Singapore football will enter a new era on April 29 when the Football Association of Singapore (FAS) holds its first-ever election of office bearers.

After months of suspense, an election notice was finally sent to all 44 members to serve notice of the election on Saturday (March 18) morning.

The election will be held during an extraordinary congress at the Sport Singapore Auditorium. There, members will elect the FAS' new leadership who will helm the association from 2017 to 2021.

Its constitution states that the presidential candidate has to run as part of a nine-member team, comprising a deputy president, four vice-presidents and three council members. 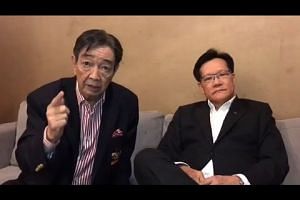 FAS election: What you need to know

The council must comprise one female member she can stand as part of a team or as an individual.

Two teams have emerged, although neither has revealed their full line-up.

On one side are the incumbents led by Lim Kia Tong, a lawyer, and comprising FAS interim VPs Bernard Tan, chief marketing officer of Singapore Technologies Engineering, and Edwin Tong, a Senior Counsel and MP of Marine Parade GRC.

They will face a team led by Bill Ng, Hougang United's chairman and director at a private equity firm, at the polls.

Former national player R. Sasikumar was another candidate reportedly keen on forming a team but it is believed the managing director of sports marketing agency Red Card Global has since changed his mind.

The election comes at a critical point in Singapore football, with both the national team and the S-League floundering.

Last November, the Lions were eliminated at the group stage of the Asean Football Federation Championship with their worst showing in the competition's 20-year history (one draw and two defeats).

V. Sundramoorthy's men also fell to an all-time low of 171 in the Fifa world rankings last October. The Lions are ranked 163rd now.

The S-League has also suffered from dwindling attendances and an overall lack of interest.

Englishman Jermaine Pennant, a former Arsenal and Liverpool player who was arguably the league's highest-profile signing, summed it up when, on the eve of his departure last year, he told The Straits Times that not even Lionel Messi, widely regarded as the world's best player, could save the 21-year-old league.

Office bearers of the FAS were previously appointed by the Government until that practice was found to contravene Fifa's regulations in 2015.

In particular, Fifa took issue with Article 19.3 of the previous constitution, which stated that "all council members shall be appointed by the Minister for Community Development, Youth and Sports (now called the Ministry of Culture, Community and Youth)" in 2015. The article goes against a Fifa directive which forbids third-party influence in a country's football association.

The constitution was amended in consultation with Fifa and was finally approved last November by 38 of the FAS' then 46 members at an extraordinary general meeting. The remaining eight members did not turn up.

The number of affiliates has since gone down to 44 after two memberships expired at the turn of the year.

The 66-year-old retiree said: "What the FAS needs is passionate and committed leaders who are given free rein to implement change.

"They must go in for the sake of football, not just with the mentality that they want to go one up on the previous committee."