(REUTERS) - Manchester United manager Jose Mourinho has become an easy target for criticism after his club's slow start to the season, but the players themselves must take more responsibility, according to former Red Devils striker Wayne Rooney.

United moved up to eighth in the English Premier League standings with a 3-2 comeback win over Newcastle United on Saturday (Oct 6) night, but they remain seven points behind leaders Manchester City.

The victory at Old Trafford follows widespread media speculation over Mourinho's future at the club, and Rooney threw his support behind his former manager.

"It's tough (at United), it has been a tough situation," Rooney, United's all-time record goalscorer, told the Telegraph.

"The players, the manager, it has been a tough start to the season. I know Jose is getting a load of stick, but I said a few weeks ago, the players have to stand up. They have to be counted and they have to be better.

"The manager can do so much, but then it is down to the players on the pitch to produce and probably collectively. It (the poor run of form) is a bit of everything coming together but Jose is an easy target." 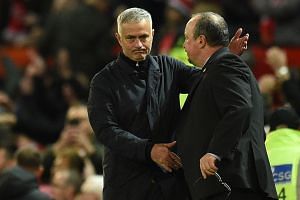 The 32-year-old believes the current situation at United is similar to Louis van Gaal's two-year reign at the club. The Dutch manager was sacked after winning the FA Cup in 2016.

"I said the same thing when Louis van Gaal was there. He took a lot of stick, but behind closed doors I said to the players, 'We have to be doing better'," Rooney added.

"Personally I think he set us up brilliantly ... but we didn't produce on the pitch, so I am sure that is getting said behind the scenes."

United next visit Chelsea in the league on Oct 20 after the international break and host Italian champions Juventus in the Champions League group stage three days later.