A remarkable climax to the game saw Watford's Tom Cleverley then miss a penalty in the 11th minute of added time.

It was the first time since a 1994 clash with Wimbledon that Everton have overturned a two-goal deficit to win a Premier League game and it delighted caretaker manager David Unsworth who tasted victory for the first time.

"You can imagine the emotions. We worked so hard and it would have been gut-wrenching for every Evertonian if that had gone in," Unsworth, who is not expected to get the job on a full-time basis, said.

"Whatever will be will be. I have been the proudest man in the world to take charge for the last two weeks and no one can take that away from me."

The hosts appeared to be heading for a sixth consecutive defeat in all competitions when goals by Richarlison and Christian Kabasele put Watford 2-0 ahead with 25 minutes left.

Andre Gray set up Richarlison for Watford's opener immediately after the restart and despite losing keeper Heurelho Gomes to a head injury, Watford doubled their lead when Kabasele headed powerfully home.

The comeback began in the 67th minute when substitute keeper Orestis Karnezis rushed out of his goal and Oumar Niasse skipped by him before bundling the ball home.

Dominic Calvert-Lewin headed in an equaliser from Everton's first corner. 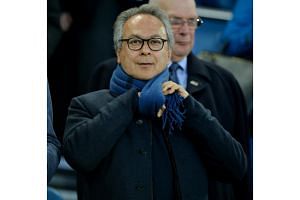 The momentum shifted completely to Everton and they were awarded a penalty when Watford defender Jose Holebas slipped and inadvertently brought down Aaron Lennon in the area and Baines calmly slotted the ball home.

The match stretched to more than 10 minutes of stoppage time when Watford were awarded a penalty after keeper Jordan Pickford brought down Gray, but former Everton player Cleverley scuffed his effort wide in the 101st minute.

"We were comfortable at 2-0. I didn't remember a period of 10 minutes when they had big pressure. The details made the difference," Watford boss Marco Silva said. "We made one mistake and they began to believe. Our player slipped for the penalty, that's very unlucky."