LONDON (REUTERS) - England captain Harry Kane has his heart set on ending his playing career in the United States kicking field goals for a team in the National Football League (NFL).

Kane, the top scorer at last year's Fifa World Cup, has long been an admirer of American football and believes successfully switching sports late in his career will help him go down in history as one of the greatest sportsmen of all time.

The path from European football to the United States is a well-travelled one, with the likes of David Beckham, Wayne Rooney and Steven Gerrard all ending up in America's top soccer league (MLS), but Kane wants to blaze his own trail.

"(The desire to play in the NFL) is real," the Tottenham Hotspur striker told ESPN in an interview. "(It's) something that in 10 or 12 years I definitely want to try.

"If you play in the Premier League and the World Cup and you then play in the NFL, would you then be considered one of the greatest sportsmen ever?

"It goes back to that drive to be the best. Even if I download a game on my phone, can I be the best in the world?"

Kane is a fan of New England Patriots quarterback Tom Brady and was at the Super Bowl this year, watching from the stands as the 41-year-old won his sixth title. 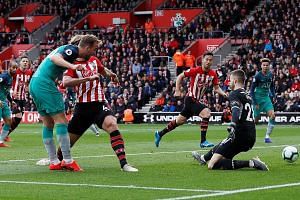 "We've had a similar path being doubted when we were younger. Maybe not being the best athletes as kids," Kane added. "Not many people thought he'd become that good or even play in the NFL and he went on to become the best ever.

"At the time, it gave me a real boost to say, look, anything is possible. If you have that self-belief and that drive and that hunger, you can do it."