ZAGREB (AFP) - Croatia cruised to a 4-1 victory over Greece in their World Cup play-off first leg on Thursday to move to the brink of a spot at next year's finals in Russia.

Croatia doubled their lead six minutes later when an unmarked Kalinic flicked in a low cross from Ivan Strinic.

The visitors pulled one back on the half-hour mark when captain Sokratis Papastathopoulos scored a header from a corner.

But just three minutes later, a quick Croatian attack down the right flank ended with Inter Milan winger Ivan Perisic powering home a close-range header at the back post.

Andrej Kramaric tapped in to increase Croatia's lead four minutes after half-time and leave Greece with it all to do in the return fixture on Sunday in Piraeus. 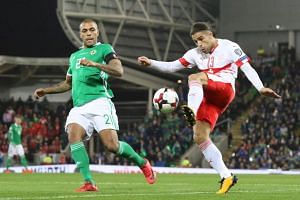 Football: Switzerland on top after narrow win over Northern Ireland

"It was a great match ... But this is only the first half, we should not relax. Nothing is over," Croatia coach Zlatko Dalic told television channel HRT.

"These are excellent players who don't need much... A bit of support, trust." Dalic was named as head coach in October after Ante Cacic was sacked following a damaging 1-1 home draw with Finland, as the team ultimately finished a disappointing second to Iceland in Group I.

"We played a great match... But we have only done half of the job, we should have a good rest and play a good match there (Greece) on Sunday," Modric added.

"We could have scored more goals, but 4-1 is a great result." The two countries' football federations have agreed that both matches will be played without visiting fans for security reasons.

Croatia are looking to qualify for their fifth World Cup since 1998.