Morata has made a strong start to his first season with Chelsea and the former Real Madrid star was too hot for Stoke to handle at the bet365 Stadium.

The 24-year-old has six goals in his first six appearances for the English champions. 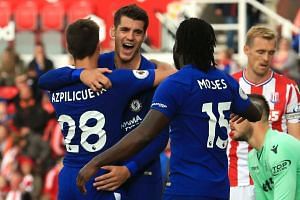 Conte was impressed by Morata's performance, but the Blues boss wants his forward to maintain that level throughout the entire season.

"Morata played a good game. A really good performance. Now he has to continue this way to be a great striker," Conte said.

Chelsea remain three points behind Manchester City, but Conte isn't concerned about the flying start made by the leaders and second-placed Manchester United.

"I think we have to be focused at what we do and not others. We want to fight in every competition we are playing," Conte added.

"It was a good day, a good result for us. Stoke are a really good team and very strong.

"We deserved to win the game. We started well and scored early. We were in control of the game. I repeat it's not simple to win away against them."