Blues boss Sarri, hired to replace the sacked Antonio Conte last month, endured a miserable debut in the prestigious friendly at Wembley as lacklustre Chelsea were swept aside by Premier League champions City.

Picking up where they left off in their record-breaking campaign last term, Pep Guardiola’s team took an early lead through Aguero, who rewarded City’s dominance with a second goal after the break.  The last side to win the Community Shield and then go on to clinch the Premier League title were Manchester United in 2010-11.

On this evidence, City could follow in their arch rivals’ footsteps at the end of the season.

“It’s not easy to play after such a short time. It’s complicated for all of them but they are so competitive. My hat’s off to them,” Guardiola said of his team’s quick recovery after the World Cup.

“We couldn’t press enough because the players were absolutely exhausted. But in general we made a good performance. I didn’t expect that level of performance.”

While the Community Shield serves as the curtain raiser to the new season, City and FA Cup holders Chelsea have very different ambitions for the Premier League campaign, which kicks off on Friday. 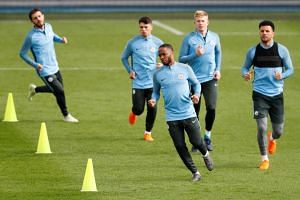 City are favourites to defend the title and among the top Champions League contenders after becoming the first English top-flight team to secure 100 points last season.

In contrast, Chelsea are starting from scratch after chain-smoking former banker Sarri was hired from Napoli as an antidote to his antagonistic predecessor Conte.

But healing the wounds of Conte’s fractious two-year reign won’t be easy for Sarri, as this spluttering performance underlined.  Sarri and Guardiola are close friends and dined together on the eve of the Community Shield, yet this first experience of Chelsea’s reduced status left a nasty taste for the Italian.

“Today we were not in control of the match. We have a long way to go. We have to work. It’s not easy,” Sarri said.

Consigning Conte’s favoured 3-4-2-1 formation to the bin, Sarri sent Chelsea out in a 4-3-3 system that malfunctioned from start to finish.  Sarri has brought Italy midfielder Jorginho with him from Napoli to serve as the pivot for his manager’s attacking gameplan.

But Jorginho made an underwhelming start, repeatedly giving the ball away in dangerous areas.  Phil Foden drove at the heart of the Chelsea defence to set up City’s 13th-minute opener with little resistance from Jorginho or anyone else.

Foden’s incisive run ended with a simple pass to the unmarked Aguero, who applied the finishing touch with a fine low strike from the edge of the area.

It was Aguero’s 200th City goal – making the Argentina striker the first player to reach that milestone for the Eastlands outfit.

Foden’s contribution was the highlight of an assured display from the 18-year-old midfielder that belied his tender age and showed why he is hailed by City staff as the ‘Stockport Iniesta’.

In the absence of Eden Hazard, still resting after the World Cup, Chelsea unveiled a precocious talent on their own in Callum Hudson-Odoi.

The 17-year-old winger gave a glimpse of his blistering pace and nimble footwork when he cut in from the left flank to bring City goalkeeper Claudio Bravo into action with a stinging drive.

Hudson-Odoi was a rare bright spot for Chelsea, with subdued Spain striker Alvaro Morata offering little evidence he can make amends for last season’s flop.  Inspired by Aguero, City could have won by five but they settled for one more in the 58th minute.

Aguero made a clever run to meet Bernardo Silva’s pass with a clinical finish that flashed past Willy Caballero as the champions showed Sarri the size of the task ahead of him.