MANCHESTER (REUTERS AFP) - Chelsea manager Frank Lampard's Premier League debut as manager of the club with whom he enjoyed so much success as a player ended in a 4-0 defeat at Manchester United on Sunday (Aug 11) and the 41-year-old accepting his team had received a "reality check".

Lampard took over from Italian Maurizio Sarri in July, returning to the west London club where the midfielder won three league titles and a host of other trophies in his 13 years.

The visitors hit the woodwork twice in the first half but were 1-0 down by the break and then conceded two quick goals as Lampard suffered the heaviest defeat by a Chelsea manager in their first game in charge since Danny Blanchflower lost 7-2 at Middlesbrough in 1978.

"We are missing internationals and big players but I don't want that excuse," said Lampard.

"The team we put out today were clearly competing in the game for long periods but we made four mistakes and they were clinical in the way they put them away. There's a reality check for us all."

Tammy Abraham and Emerson struck the frame of the goal before half-time and Chelsea played some attractive football until United's powerful counter-attacking play exposed the away side's defensive weaknesses.

"They are a counter-attacking team, it's a big strength, they have pace and if you turn over the ball or give them opportunities, they will counter," said Lampard. 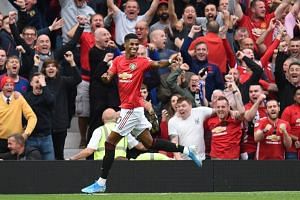 Nothing better than to prove critics wrong: Frank Lampard

"For massive parts of the game, we didn't allow them to do that. We were the ones winning the ball back, but our final ball wasn't great. We were so comfortable in the first half, so loads of lessons for us.

"We can't make unforced errors and mistakes at this level. At the same time, it was nowhere near a 4-0."

As for United, Ole Gunnar Solskjaer's men were in need of a fast start to the campaign to erase memories of a terrible end to last season and they got it.

Marcus Rashford's early penalty opened the scoring against the run of play, but three goals in 16 second-half minutes from Anthony Martial, Rashford and debutant Daniel James had Old Trafford in raptures.

"We took risks but that's the way here, you've got to go for it. It's risk and reward and today we were rewarded," said manager Solskjaer.