LONDON (AFP) - Yannick Bolasie put a dent in Arsenal's hopes of qualifying for the Champions League with an equaliser for Crystal Palace nine minutes from time in a 1-1 draw at the Emirates Stadium on Sunday.

But Palace, second best throughout in this all-London Premier League clash, hung on in and were rewarded when Bolasie's edge-of-the-box shot beat Petr Cech, who should have saved it, at the Arsenal goalkeeper's near post in the 81st minute.

The result effectively ended the Gunners' already slim title hopes, with Arsene Wenger's side now 13 points behind leaders Leicester City, with only a maximum of 15 on offer from their final five league games.

More significantly it meant Arsenal, bidding to play in the Champions League for a 19th consecutive season, failed to regain third place from Manchester City and were left just four points in front of fifth-placed Manchester United, with only the top four at the end of the season guaranteed a place among Europe's elite. 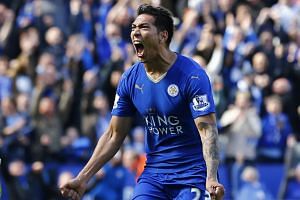 Arsenal, jeered off the field by their own fans at full-time, were the only team that had something meaningful to play for, with Palace all but safe and more focused on their looming FA Cup semi-final against Watford.

That it took until the 24th minute for a meaningful attempt was down to a Palace side content to sit back and soak up pressure.

Palace, especially away from home, like to defend deep and hit teams on the break and Bolasie did just that but his low drive was smothered by the returning Cech.

For all Arsenal's dominance, Palace goalkeeper Wayne Hennessey didn't have to make a save for much of the first half.

But Wales international Hennessey was called upon to thwart Mesut Ozil with a low stop after the German playmaker exchanged passes with Sanchez.

Arsenal's pressure was, however, rewarded just before half-time.

Moments after Connor Wickham had headed over for Palace, Sanchez was more accurate when he nodded Danny Welbeck's pass in from six yards out after Mile Jedinak had been caught in possession.

That was the Australian midfielder's final act as he was replaced at the break, with Palace manager Alan Pardew sending out a more attacking side.

The danger was that Arsenal could pick the south Londoners off and Welbeck and Alex Iwobi both missed early chances as the Gunners took advantage of the extra space.

Ozil was then inches away with a 58th minute free-kick as the home side looked to kill off Palace.

The Eagles then introduced former Arsenal striker Emmanuel Adebayor, who received a hostile reception from fans of his old club.

Yohan Cabaye's corner was glanced on by Bacary Sako but Cech turned over the near-post header.

But Cech was beaten via Bolasie's 81st-minute strike against the run of pay.

The winger had been relatively quiet before he cut inside and saw his shot squirm beyond Cech's grasp to stun the Emirates and earn Palace a point that all but guaranteed their Premier League status.