Pavard's status skyrocketed in the summer when he scored a superb goal in a 4-3 last-16 win over Argentina that set France on their way to World Cup glory in Russia.

The 22-year-old defender has been at VfB Stuttgart since 2016 but seems unlikely to remain at the struggling side beyond this season, with a big-money move to Bayern among other "concrete offers" on the table.

"I haven't made promises to any clubs," Pavard told Sky Germany on Thursday (Dec 6).

"Maybe I will go (to Bayern) but I don't know what the future has in store for me.

"I've never hidden the fact that my ambition is to play in the Champions League."

Despite reports linking the centre-back to English giants Liverpool and Tottenham Hotspur, as well as Napoli, Pavard's love affair with all things German could see him remain in the Bundesliga. 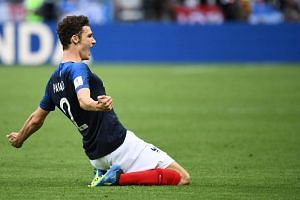 "I might just stay in Germany, but for the moment I want to focus on Stuttgart. I'm still here, we're in a difficult situation and I want to help us get out of it," he added.

"I like the people here and I fit in well...the mentality and the commitment, even at training, we never let up.

"That's how I like it. My mentality is German, I like this country a lot." Stuttgart are currently third-bottom in the Bundesliga having won just three of their 13 games.