PARIS (AFP) - Lionel Messi fired Barcelona into the last 16 of the Champions League on Wednesday (Nov 23) after a 2-0 win at Celtic as they were joined in the knockout rounds by Pep Guardiola's Manchester City.

The Argentine star returned from illness to score both goals at Celtic Park - the second from the penalty spot - to send the five-time European champions through as winners of Group C.

City recovered from a goal down in Germany to earn a 1-1 draw at Borussia Moenchengladbach as both sides finished with 10 men.

Raffael grabbed the opening goal for Gladbach on 23 minutes, but David Silva poked in Kevin de Bruyne's cross just prior to the break before Lars Stindl and Fernandinho saw red in the second half.

French champions Paris Saint-Germain seized control of their own destiny in Group A with a 2-2 draw away to Arsenal. 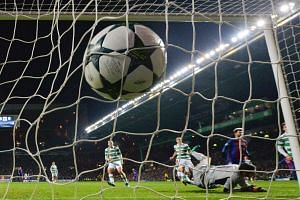 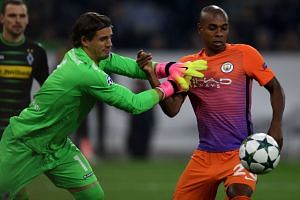 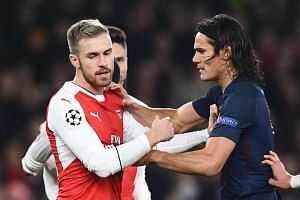 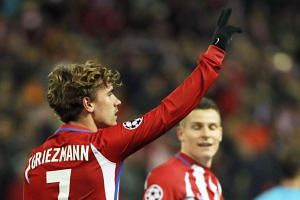 Edinson Cavani turned in Blaise Matuidi's cross at the far post to hand PSG an 18th-minute lead at the Emirates Stadium.

But the Gunners hit back on the stroke of half-time as Alexis Sanchez was brought down by Grzegorz Krychowiak and Olivier Giroud rolled home the resulting spot-kick.

Arsenal looked to be in pole position to finish top of the group when an attempted clearance from Marquinhos ricocheted off an unfortunate Marco Verratti and squirmed past Alphonse Areola for a fluke own goal.

But Lucas ensured Unai Emery's side departed with a point as his header from Hatem Ben Arfa's corner flicked off Alex Iwobi and flashed past David Ospina 13 minutes from the end.

Both PSG and Arsenal have 11 points with one match to play, but the French outfit own the head-to-head edge on away goals after the reverse fixture at the Parc des Princes in September finished 1-1.

Bayern Munich crashed to a shock 3-2 defeat in Rostov and could face a daunting draw in the next round after Atletico Madrid's 2-0 victory over PSV Eindhoven guaranteed Diego Simeone's men first place in Group D.

Douglas Costa rifled Bayern ahead on 35 minutes in Russia, but Rostov equalised through Sardar Azmoun on the stroke of half-time before going ahead courtesy of a Dmitri Poloz penalty.

In Madrid, French duo Kevin Gameiro and Antoine Griezmann netted second-half goals as Atletico - runners-up twice in the past three seasons - registered their fifth win in as many matches.

Besiktas launched a remarkable second-half recovery as they fought back from three goals down against Benfica to draw 3-3 in Istanbul.

Benfica, champions of Europe in 1961 and 1962, appeared to be sailing through to the last 16 after cruising 3-0 ahead inside barely half an hour through goals from Goncalo Guedes, Nelson Semedo and Ljubomir Fejsa.

But the Turks pulled one back on the hour courtesy of Cenk Tosun before two goals in the final seven minutes from Ricardo Quaresma and Vincent Aboubakar revived their qualification hopes.

Napoli were held 0-0 at home by Dynamo Kiev and must take at least a point from their trip to Benfica in a fortnight, while Besiktas will punch their ticket to the knockout stages if they win in Ukraine.