NEWCASTLE (AFP/REUTERS) - Pierre-Emerick Aubameyang fired Arsenal to a 1-0 win at Newcastle in their Premier League opener on Sunday (Aug 11), providing hope of an improved run this season for Unai Emery's side.

The Gunners finished last season in turmoil after blowing their bid for a top-four place with a disastrous spell in the final weeks.

Adding to Emery's woes, Arsenal were crushed by Chelsea in the Europa League final to shatter their dreams of Champions League qualification.

But Arsenal have enjoyed a profitable close-season, with a host of new signings raising morale around the Emirates Stadium.

And Aubameyang gave Arsenal fans renewed belief they can get back in the top four this term with a typically predatory second-half finish to give the north Londoners a winning start.

Arsenal had a wretched away record last season, keeping just one clean sheet on their travels, so taking three points without conceding was the perfect way to turn over a new leaf.

Aubameyang's strike ruined Newcastle manager Steve Bruce's first match in charge of the club he supported as a boy. 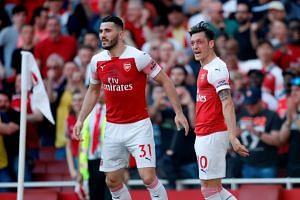 Bruce left second-tier Sheffield Wednesday to join Newcastle in the close-season following the departure of fan favourite Rafael Benitez, who had grown tired of a lack of backing from controversial owner Mike Ashley.

Bruce's appointment was hardly greeted with widespread joy on Tyneside and the season started with Newcastle fans staging a protest against Ashley in the streets and then boycotting the match in large enough numbers to leave numerous empty seats around St James' Park.

Meanwhile, Wolverhampton Wanderers had a goal by Leander Dendoncker ruled out by the Video Assistant Referee (VAR) in an entertaining 0-0 Premier League draw against Leicester City at the King Power Stadium in another game on Sunday.

Wolves thought they had scored six minutes into the second half when Dendoncker blasted in from close range but VAR deemed that the midfielder had headed the ball onto team mate Willy Boly's arm off a corner before taking the shot.

That was shortly after Raul Jimenez produced the game's first shot on target but Wolves failed to get the breakthrough as the Mexico striker's right-footed effort was easily dealt with by Leicester goalkeeper Kasper Schmeichel.

Leicester, who dominated possession in the opening period, missed a clear opportunity to take the lead in the 38th minute when Youri Tielemans fizzed a pass into the box but striker Jamie Vardy failed to connect at point blank range.

Wolves could have made Leicester pay for that miss seconds before the break but forward Diogo Jota lost his footing in a shooting position after he won the ball near the halfway line off a wild clearance and charged into the penalty area.